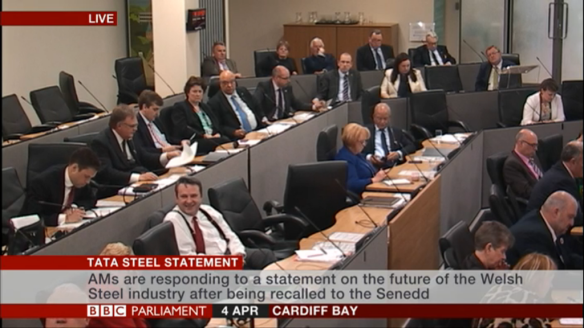 The debate by the Assembly

Recalls of legislative assemblies are not unknown: Parliament was recalled to Westminster in late August 2013 (a week before their summer recess was due to end) to discuss the response to chemical weapons in Syria, and again thirteen months later for developments in Iraq. Other causes for Parliamentary recalls include the Falkland Islands, Devaluation, the Suez Canal, the death of Queen Elizabeth the Queen Mother and the death of the Baroness Thatcher.

What is interesting about today’s recall of the National Assembly for Wales is that it will be the last time they ever meet. On Wednesday 6th April 2016 the National Assembly will dissolve and the election (for Thursday 5th May) will officially begin. Indeed, the Scottish Parliament dissolved eleven days ago and the Northern Ireland Assembly followed on the penultimate day of March – as did the Commons and the Lords a year earlier. This crisis meeting, therefore, is the last hurrah of the current body. After this week it will no longer exist, and the Assembly which meets in May will be a new one, with different members and possibly producing a different government.

This meeting is also strange because the Assembly is not housed in the Senned – which is currently closed for refurbishment – but in the Tŷ Hywel (formerly Crickhowell House) where its predecessor sat in the early days of Welsh devolution. The cramped chamber (resembling a university lecture theatre more than a parliament), hardly provides the grandeur that might be expected for the final meeting.

BBC parliament originally expected the meeting to last from 1330 to 1500, but naturally the Welsh talked for more than double that time. There have also been calls (including a petition by Labour leader Jeremy Corbyn) to have the Westminster Parliament recalled. The Prime Minister has rejected this, but the cabinet are working on strategies for dealing with the crisis.

The new Welsh assembly (the fifth since devolution) will meet at some point in May.