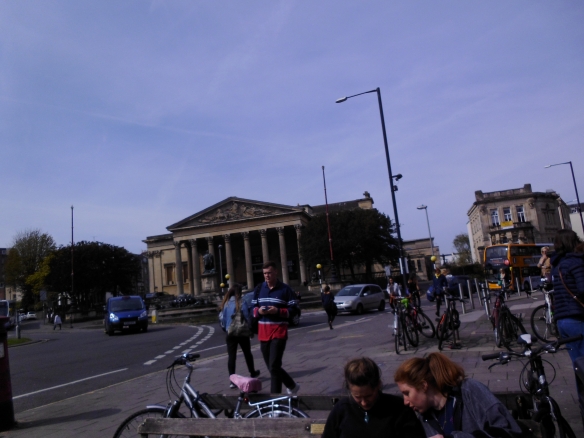 Today I completed my fourth and final university inspection. Whereas the visit to the University of Hull ten days prior had been a trivial pursuit, Bristol would prove a far greater struggle.

Though the university had offered several applicant experience days during the previous two terms, their timing would most likely have required another three day trek reminiscent of that for Cambridge – with the difference that Bristol would not be providing any accommodation. Rather than expend the necessary school time and parental money for such an excursion, I settled for a student-led campus tour which, though not allowing me access to the academic facilities, would at least give me first-hand experience of what it might be like to live there for three years.

It was a very long day – though the tour itself lasted only two hours, the journey from Holderness to Bristol took four hours each way. Should I end up studying at Bristol I would likely take the same journey six to twelve times per year by train – each trip being closer to six hours long. We were initially assembled at Beacon House, where two students were waiting in red jackets. Applicants were divided into two groups depending on their subject combinations and taken for a lengthy walk around the city campus.

We were shown the student union building, and around an example of the accommodation at Clifton Hill House. Though the interior was fairly Spartan compared to its external grandeur it at least seemed liveable (and the bedroom was bigger than my own at home). We were then shown inside the Wills Memorial Building, and told that the university had been set up to provide a fall-back for Wills’ son who had been rejected from Oxford (a legacy no doubt continued by many Bristol students). 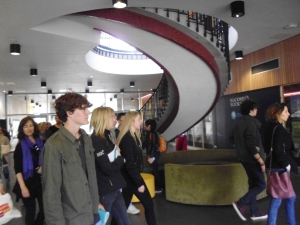 Inside the student union

The tour continued through the science departments (I could only look through the windows of the School of Chemistry but another applicant assures me that it left little to be desired.) and into the student gym. Along the way we also saw the reception area of the School of Engineering and a lecture theatre shared by multiple faculties, then wandered through the Literature block.

After an uneventful return journey through some of the leafier roads, we arrived back at Beacon House and promptly dispersed.

I would have liked to see the university in more detail, and in particular to see the laboratories in which I would be working, but my assurances from other students and Bristol’s reputation give me no great cause for concern.

Soon I will have to make a decision. With Cambridge and Durham out of the game, it becomes a binary choice between Leeds and Bristol for my first preference (Hull will be the backup in either case). Both are highly-regarded and both appear welcoming, I just have to make up my mind on which ultimately trumps the other.

Oh, and then I have to pass all my A-Levels, of course.