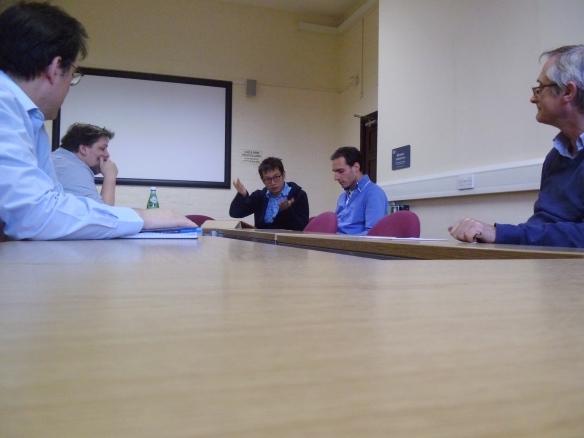 Though all sciences are said ultimately to derive from philosophy, the clichéd question “Why are we here?” does not often form the basis of our teachings or deliberations. Today however, that very question was on the minds and lips of all who arrived in Seminar Room A for a meeting of the Board of Studies, for which no agenda had been given. Eventually the document was found and a more substantive discussion got underway.

Attendance remains an issue in certain classes with some tutorials said to have 20-30 students missing. Some staff also reported very low delivery rates for homework assignments.

The issue of academic support tutors returned as the majority of students still have not met theirs since induction week. I was an exception only by virtue of my tutor being present at this meeting. It was agreed that all students would meet their tutors after completion of an upcoming careers training assignment.

We tangentially brushed upon mathematics’ lack of a home when someone suggested creating a student lounge for the subject and suggested that with a new engineering suite under construction we might be moved into the Fenner building currently used by applied sciences. Details at this stage are unclear and it may not take effect for some years.

Other concerns centred around student ID cards: the electronic scanners used to mark attendance at lectures had in many cases malfunctioned, necessitating a return to paper registers. A course representative also complained that the beep noise after a successful scan was too loud and thus anyone arriving late would inevitably disrupt the class.