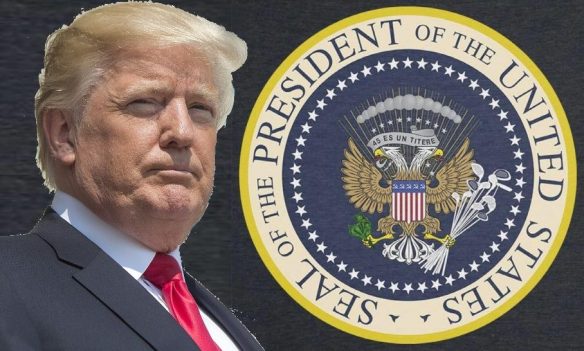 Eight days ago the President of the United States gave an address at the Teen Student Action Summit of the political organisation Turning Point USA. As is often the case for such appearances, he was flanked by projections of the presidential seal. This time, however, something was wrong.

A derivative of the Great Seal, the presidential seal is known less for the rather diminutive escutcheon (Paly of thirteen Argent and Gules, a chief Azure.) than for the much larger supporter – a bald eagle displayed, holding in its dexter talon an olive branch and in the sinister thirteen arrows all Proper – and for the motto of “E Pluribus Unum”, which was considered the effective motto for the whole country until the controversial imposition of “In God We Trust” in 1956. The presidential seal in all its variants is famous worldwide. Even my own letterhead is based on it, though swapping the eagle for my namesake passerine. This very familiarity makes it all the odder for the recent substitution to have gone unnoticed until too late.

The seal which appeared beside the president last week may have looked legitimate at first glance, but on the second there are some glaring differences. The most obvious is that the bundle of arrows has been replaced with a set of golf clubs. The next is that the eagle has two heads pointing in opposite directions. Peering closely at the emblem, it can also be seen that the olive branch has been replaced by a wad of dollar bills and that the motto scroll says “45 es un títere”.

Designed by Charles Leazott, a once-loyal Republican who defected after the rise of Donald Trump, the doctored image paints the incumbent as a puppet of the Russian Federation whose primary concern is for his own wealth and leisure.

This is far from the first instance of heraldry being used for satirical purposes. During the American Civil War, H. H. Tilley produced a mock coat of arms for the Confederacy – which had not yet adopted a real state emblem. A cigar-smoking plantation owner and a hand-manacled slave support a shield of cotton, tobacco, and sugar, with three slaves hoeing the fields in base and some of their owners’ characteristic tools in chief. The motto given is “Servitudo Esto Perpetua”. Behind the crest rooster are two flags in saltire. One is clearly the battle flag used by several of the southern armies, the other is a skull and crossbones with the number 290. This latter flag could refer to the CSS Alabama, which was built in secret and known merely as “Hull No. 290” prior to launch.

Going back further to 1814, the Anglo-German publisher Rudolph Ackermann released and Explanation of the Arms of Napoleon Bonaparte. This particularly savage illustration has, for a crest, the world being set on fire and stabbed with French standards. The escutcheon, a montage of eight acts of barbarity attributed to the recently-deposed Emperor, is supported on the dexter by Death holding an hourglass and on the sinister by Satan wearing an iron crown.

Not all heraldic satire is quite so brutal: a 1909 Punch cartoon by Bernard Patridge alludes to the art by citing “an heraldic inversion”, in which the prime minister Herbert Asquith has to stand with his limbs awkwardly spread out to hold Winston Churchill (President of the Board of Trade) and David Lloyd George (Chancellor of the Exchequer) on his shoulders. The drawing was made during the crisis over the “People’s Budget”, the commentary being that Asquith’s prominent ministers were the real protagonists of the government, their nominal leader being in fact subservient.

A famous Gillray cartoon from 1797 shows William Pitt the Younger looming over the House of Commons. Notable is the suggestive positioning of the royal coat of arms (affixed to the canopy above the speaker’s chair to indicate the royal authority of the legislature) between the premier’s legs. The message is that Pitt had no passion beyond the accumulation and exercise of state power.

These armorial parodies continue into the modern day – many being found on Wikimedia Commons, though these do not see much use. A particularly memorable instance comes from 2011, showing the arms of Princess Beatrice of York, the coronets replaced by the unusual hat she wore to the wedding of her cousin the Duke of Cambridge.