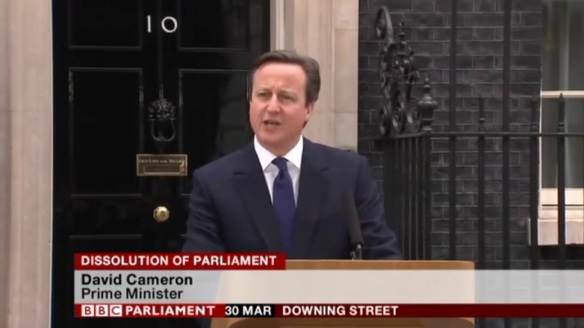 We are turning our country around… we must see this through together.

Five years ago, the fifty-fifth Parliament of the United Kingdom dissolved, commencing the general election campaign. As usual, proclamations were read out from the steps of the Royal Exchange in London, and from the Mercat Cross in Edinburgh, but on this occasion the text was quite a bit shorter than had been the norm before. The substance of the revised version concerns only the convocation date for the newborn legislature and the issue of writs of summons to the Lords Spiritual and Temporal. The act of dissolution itself was omitted, as was any reference to writs of election.

The reason for this was, of course, the Fixed-Term Parliaments Act 2011, which curtailed the monarch’s prerogative to make and break parliaments whenever her prime minister said so. From then on, a general election would happen on the first Thursday in May of the fifth year since the previous election took place, with dissolution occurring twenty-five working days in advance. There were of course some exceptions, but they will be detailed later.

For the first time, the date of the next general election was known years in advance. Even better, the death date of the 56th Parliament was known before it was even born: the five years after 2015 included two leap days to bring the days of the week right around, so this year the general election timetable is exactly the same as last time. Some commentators lamented that the element of surprise had been lost from British politics.

That at least was the dream, now to the reality: The second Cameron ministry did not gracefully live out a full term. Nor, for that matter, did the next three governments. The fifty-sixth Parliament dissolved on 3rd May 2017, after Cameron’s successor Theresa May successfully sought a two-thirds majority in the Commons for an early election motion under Section 2 of the Act. The fifty-seventh parliament was dissolved on 6th November 2019 by a special act of its own creation, May’s own successor Boris Johnson having tried a Section 2 motion several times and failed miserably. We are now in the time of the 58th Parliament, which is currently expected to expire on 25th March 2024, though that expectation has little solidity given that the present government intends to repeal the FTPA altogether at some point.

Jeremy Corbyn, who emerged from three decades of backbench obscurity to become Leader of the Labour Party in the aftermath of the 2015 general election, is due imminently to retire again. The result of the leadership election is due to be announced on Saturday, though the large conference originally planned has had to be scaled back dramatically due to the world events which have transpired in the meantime. It strikes me that, of the six Labour MPs who originally set out to be Corbyn’s replacement, four only joined the House of Commons in 2015. Had politics gone normally they would only now be at the end of their first term, instead of well into their third.

Obviously, it may have been awkward now if those snap elections hadn’t taken place, since all elections scheduled to take place on 7th May this year have been pushed back to 6th May 2021. Presumably the general election would have had to be delayed too*, the first instance of such an action since 1944.

As noted in my posts about Paul Danahar and Terence Casey, it has become common to remark that we currently inhabit the dark timeline, or words to that effect. Neither man could decide precisely on the point of divergence. Until someone else can suggest a better point, I will choose 2015. Obviously the COVID-19 pandemic is an entirely separate issue, but the issues that most prompted the calamitous musings prior to the outbreak were the presidency of Donald Trump in the United States and the exit of the United Kingdom from the European Union. These phenomena both had their gestation five years ago. It was in May that the Conservative & Unionist Party won the general election outright with a manifesto that included an In-Out referendum, which would likely have been dropped in coalition negotiations had that parliament been hung as expected. It was in June that Donald Trump came down that escalator and announced his desire for the GOP nomination.

Life would never be the same again. Still, at least I got to rack up my edit count in the past few years.

*Section 1 of the FTPA allows the prime minister to delay polling by statutory instrument, but only for two months as opposed to the twelve now in place.

Turn Left is apparently trending on Twitter. It’s not entirely clear, but I think it’s something to do with the US presidential election.

The Dissolution and Calling of Parliaments Act has received Royal Assent, restoring the prerogative to call elections upon ministerial request.

1 thought on “Turn Right and Change the World!”