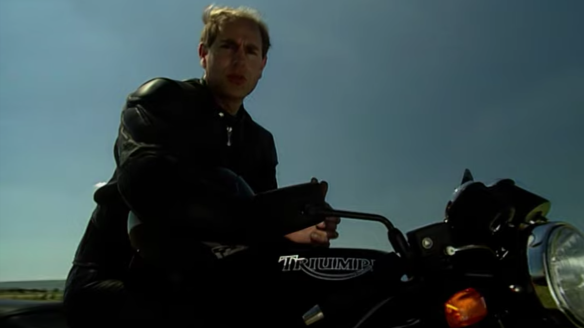 I suppose there are worse things he could be wearing.

A few days ago I discovered the YouTube channel Documentary Base, whose content is what you’d expect. What particularly caught my interest was the series Crown and Country. The Prince Edward writes and presents a historical tour of England’s royal landmarks, one of many documentaries put out by his ill-fated Ardent Productions. This programme is about the same age as I, and now so obscure that its IMDB page looks to be mostly guesswork.

As far as I can decipher there were three series (in the years 1996, 1998 and 2000 – the former typed in the credits as such while the latter two are rendered as MCMXCVIII and MM). The YouTube playlist does not have them in broadcast order – and I think it may even mislabel a few of them, which makes it a little confusing. Series 1 and 2 are differentiated by swapping some of the clips in the opening title sequence montage. Series 3 switches from 4:3 to 16:9, and the title sequence is crudely cropped. The first two series credit the presenter as “Edward Windsor”, the third as “Edward Wessex”.

Technical details aside, the programme is pervaded by an otherworldly quaintness. As with so many films of this type it seems to be designed for international syndication rather than domestic broadcast, and while many specific events and locations are discussed the production itself is curiously timeless. It bulges with luxuriant panning shots of rolling countryside, weathered stone and ornately carved wood panels. The overall tone puts me in mind of Mitchell & Webb’s Sunday afternoon relaxation DVD. There are other curiosities, too, such as the title music which occasionally sounds like the middle eight of the Doctor Who theme.

The parts most interesting to me, as a blogger on heraldry, were the visits to the College of Arms and St George’s Chapel, neither of which get as much screen time as I would like.

In more recent news, the Prince of Wales has launched RE:TV, a channel (or platform, it’s not entirely clear) centered around his environmental projects. I also found this virtual interior tour of Buckingham Palace by interior design blogger Ashley Hicks.