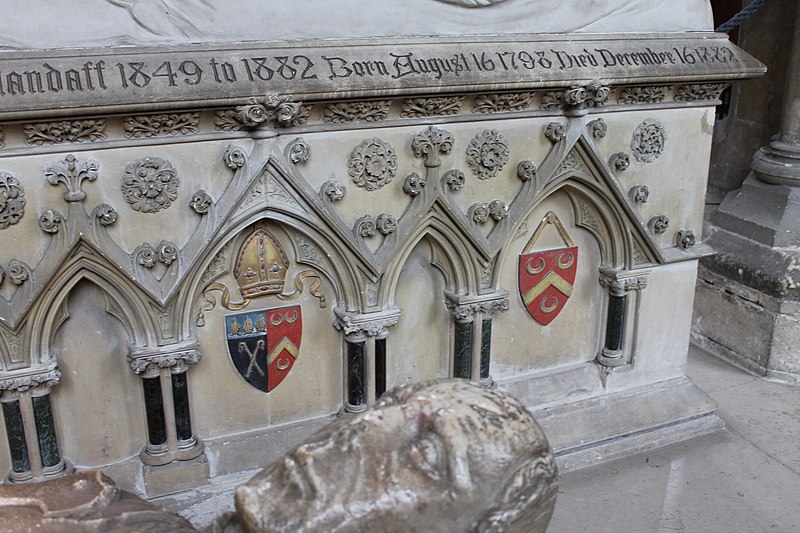 The tomb of Alfred Ollivant in Llandaff Cathedral, his arms impaled with those of the see.

Having composed armorial pages for speakers, Lord Chancellors, universities and schools, this month I turned my attention to the church. The Anglican Communion has sixty-seven bishops in the British Isles. Forty-two of these belong to the still-established Church of England*, twelve to the Church of Ireland, seven to the Scottish Episcopal Church and six to the Church in Wales.

Each bishopric is considered a corporation sole, and for each an official coat of arms is recorded. The incumbent bishop may impale his personal arms with those of the see – symbolically marrying him to the job.

In contrast to the tiresome searching that has often been required to track down the blazons for the aforementioned politicians and educational institutions, ecclesiastical heraldry has proven exceedingly easy. The arms of most of the sees in Britain have been extensively recorded by Burke, Debrett, Fox-Davies, Hartemink and Woodward. Furthermore the vast majority of those arms had already been illustrated for Wikimedia Commons, so I had merely to compile them and type up their respective blazons.

Looked upon as a whole, the quality of Anglican heraldry is rather disappointing. Very little imagination is shown with the choice of charges and many sees have coats so similar as to be barely distinguishable: ten separate sees have the symbol of two keys in saltire and five use a trio of episcopal mitres. Within the province of Canterbury alone the sees of Coventry, Derby and Lichfield all centre on a cross potent quadrate while Guildford, Portsmouth, Truro and Winchester all have keys in saltire with swords. Fox-Davies complained in his writings of grants of personal arms in which the shield merely repeated as charges what should have been reserved for use as external ornaments – helmets, coronets and occasionally staves of various offices. It seems that the use of the mitre on so many diocesean shields is the ecclesiastical counterpart.

Another problem with the arms here covered is that a great many of them specify pictorial representations of humanoid figures. These include a handful of named saints, especially the Virgin Mary holding her baby and in Chichester’s case even the adult Jesus enthroned. Anyone with a working knowledge of heraldry (as well as vexillology and indeed most forms of graphic design) will know that such things are generally best avoided.

Thus far I have talked about the corporate arms of the bishoprics, but earlier this month I attempted to find the personal arms of the bishops themselves, hoping to make personal armorials for the Archbishops of Canterbury and York. Alas these arms were a lot harder to come by, for Burke and Debrett tend not to list personal arms of bishops and only in recent decades has it become the norm for the primates to transition to the Lords Temporal after retirement**. The only ones which I could find were those of the Bishops of Chester, already researched by the now-defunct Cheshire Heraldry Society. Those escutcheons were much more varied as well as much easier to construct in comparison to many of those which I have done before, so illustrating and uploading the whole lot took only three days.

*This includes the Diocese of Sodor and Man, after which Wilbert Awdry named his island, as well as the Gibraltar-based Diocese in Europe.

**At present John Sentamu is awaiting the life peerage that was announced in December, having left office in July.