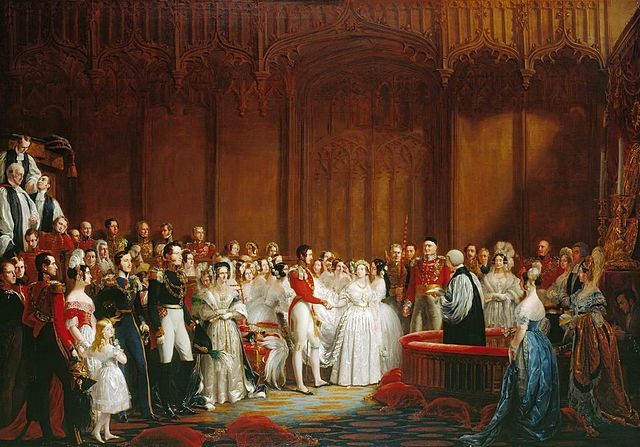 To the extent that most people have heard of heraldry at all, they conceive it as the study and management of coats of arms. Certainly that is what the majority of my posts on the topic have discussed. That is not a herald’s only concern, however, for armory tends to intersect with other interests. Genealogy, vexillology and phaleristics are the obvious ones, but also within orbit are matters of ceremony and protocol, which often centre heavily on precedence.

Orders of precedence determine the seating plans of formal dinners and the sequencing of parades or processions. Certain institutions whether public or private may have their own specific orders of precedence, and even unaffiliated civilians may be required to adopt them for their extended families at weddings and funerals. What tends to concern heralds and heraldists, though, is the general order of precedence for an entire country.

The order of precedence for England & Wales (though that distinction is a recent one) can be documented descriptively as early as 1399, but the earliest extant prescriptions are the House of Lords Precedence Act 1539 and an ordinance issued by commissioners of the office of Earl Marshal in 1595 (itself based largely on the Lord Chamberlain’s order from 1520). It arranges the royal family and the grades of the aristocracy (peers, knights, esquires, gentlemen and their offspring) as well as the holders of important government, judicial and ecclesiastical offices. The sequence reflects the relative importance of certain jobs in Tudor times and earlier, which is often rather different to the level of power they exercise today. The Lord President of the Council and the Lord Keeper of the Privy Seal – now sinecures given to the leaders of the houses of Parliament – rank just below the royal family while the secretaries of state who make up the bulk of the cabinet rank just below barons and the Chancellor of the Exchequer has a redundant setting below the privy council.

The bulk of the scale has remained intact to the present day – and been repeated at the start of each edition of Burke’s and Debrett’s, though royal warrants have been issued on occasion to make small updates, such as the insertion of new orders of chivalry or of offices not formerly recognised.

The Lord High Treasurer was once a great officer of state*, but when it was put into commission the commissioners had no precedence, even after it became convention for the First Lord of the Treasury to be the de facto head of government. Victoria’s prime ministers would frequently walk into formal gatherings behind barons of their own nomination. The job of Prime Minister was at last given formal recognition by a warrant in December 1905 placing him in the position his grandfather office would have conferred. The Speaker of the House of Commons ranked rather low until a warrant in 1919 put him just after the Lord President. Other offices have fallen away over time, such as the Vice-Regent in Spirituals, the Lord High Steward and the Lord High Constable.

As with so many such matters, the situation in Scotland is less well documented. The earliest extant prescription is Edward VII’s royal warrant from February 1905. Indeed, that may be the earliest ever such instrument, for the preamble admits “a Scale of Precedence in Scotland has not been defined with due authority” and “doubts and a diversity of practice have arisen in consequence”. The order within the royal family is much the same as for England, with the exception that the Lord High Commissioner to the General Assembly of the Church of Scotland during the sitting of the General Assembly outranks everyone except the sovereign – including the Duke of Rothesay. The office is currently held by Prince William, who thus temporarily precedes his own father. Following the nephews of the sovereign – cousins are mysteriously omitted – there is a complicated insertion explaining that the Lord Lieutenants, Lord Provosts and Sheriffs Principal rank above the Lord Chancellor within their own jurisdictions. Following the Lord Chancellor the other Scottish high officers are listed, then the ranks of the peerage and orders of chivalry in a manner near-identical to the English version. The Church of Scotland is rather different in status and structure to the Church of England so there are no bishops listed for the Scottish scale. Senators of the College of Justice are ranked similarly to High Court judges and Lords Justices of Appeal, though other senior Scottish judicial figures are ranked above the viscounts whereas their English counterparts are below barons. I note that the position for Secretaries of State is not defined in the Scottish scale either.

Small amendments have been made to the scale in subsequent years – most prominently in 1999 to clarify the positions of office-holders in the devolved administration. Even so, there are some glaring omissions:

A series of constitutional reforms in the latter noughties saw the duties of the Lord Chancellor carved up: His administrative role in the English & Welsh judiciary was devolved to the Lord Chief Justice, his executive powers to the Secretary of State and his presidency of the upper house of Parliament to the elected Lord Speaker. Plans to abolish the chancery altogether were dropped and the incumbent’s ceremonial precedence was not pushed down, but it was deemed necessary for the others to be raised up. The Lord Speaker was given precedence immediately after the Speaker of the House of Commons. It is curious that the upper house was not given ceremonial priority here, though that could be in recognition of the superior vintage of the latter office as well as the greater degree of power he has within his institution. The Lord Chief Justice had previously been placed below the Chancellor of the Duchy of Lancaster, similarly redundant as all holders in nearly three centuries had been privy councillors and/or peers. A warrant in 2007 promoted him to just below the Lord Speaker, as well as moving the Master of the Rolls (still usually commoners) to just below the barons.

The Lords of Appeal in Ordinary previously ranked solely by their necessary peerages. Upon their reconstitution as a separate Supreme Court, the justices (who from then on would not be ennobled) were placed immediately below the Master of the Rolls, while the President was placed immediately below the Lord Speaker – and thus above the Lord Chief Justice. A difficulty arises here because the Supreme Court is a UK-wide institution while the Master of the Rolls only exists in England & Wales. The precedence of non-baronial Supreme Court justices in Scotland is thus undefined – though all at least are members of the Privy Council. The President also has this problem, although it may be masked by the complexity of the incremental insertions – Scotland had its own privy council prior to the Acts of Union, with its own Lord President whose responsibilities and status were comparable to those of his English counterpart. Logically the Lord President for Great Britain (and later the United Kingdom) would continue to have the same precedence as his provincial predecessors, but the Scottish scale from 1905 makes no reference to the post. This in turn means that the Speaker of the House of Commons, the Lord Speaker and the President of the Supreme Court are all without a defined rank in Scotland. Even the Prime Minister is left without a place, since the Archbishop of York is England-only**. It is no wonder that the Scottish scale was described by one contributor in 2011 as “a bit of a mess” and by another as “complete horlicks”.

Northern Ireland is an even worse story – there is no scale properly defined, and the Wikipedia article uses an unofficial, descriptive list from Burke’s 106th edition in 1999, which tellingly says “as in England” rather frequently.

A common feature of all three is that men and women are listed separately***. The bishoprics and various public offices are exclusively listed in the male scale. There were insertions into the women’s for dames of various orders of chivalry (outranking wives of knights of the same), but subsequent warrants regarding ministers and judges do not bother to specify which list they are altering. A convention has developed among Wikipedians (and probably everyone else who has to mind these matters) that any office held by a woman is temporarily transposed to the female scale, but without authoritative guidance we cannot be certain.

Another curiosity is that the general scale is formally headed by “The Sovereign” while the ladies’ scale is headed by “The Queen”, such that a queen regnant is technically first man as well as first woman, and while a king’s wife is a queen consort a queen’s husband is nothing at all until a special warrant is issued for his benefit. While we’re on the subject of the royal family, our attention should turn to the four – soon five – grandchildren of the Prince of Wales.

It is unusual for an heir apparent to be a grandfather before his accession to the throne. George IV (as regent) almost managed it in 1817 when his daughter Princess Charlotte of Wales was pregnant but she and the baby predeceased him. Edward VII had quite a few – Lady Alexandra Duff (later Duchess of Fife) in 1891, Lady Maud Duff (later Countess of Southesk) in 1893, Prince Edward of York (later Edward VIII) in 1894, Prince Albert of York (later George VI) in 1985, Princess Mary of York (later Princess Royal), Prince Henry of York (later Duke of Gloucester) in 1900. The first two were through a daughter so don’t really count for these purposes and the latter four were still small children when Victoria died, which means it was never necessary to define their place at state functions, though their titles and styles were subject to some dispute. Prince George of Cambridge is now older than Edward VIII was at his great-grandmother’s death and could be into adulthood – or at least adolescence – by the time of the next demise of the crown. Without any specific place for them within the royal family section, Wikipedians have determined that George and his cousin Archie rank as eldest sons of dukes of the blood royal. This status is below the non-royal dukes, who in turn are below the great officers already described****. Charlotte, as the daughter of a royal duke, similarly ranks below the duchesses. This makes sense if you consider royal dukes to be an unofficial sixth extra rank of the peerage above the normal dukes. By extension one would expect Prince Louis, as younger son of a royal duke, to rank immediately below the eldest sons of normal dukes who in turn are just below the marquesses. Instead his place is just below the earls but above the eldest sons of marquesses. This placement is rather confusing as it breaks the otherwise-consistent pattern by which children of peers are stationed. I don’t think there were any royal dukes in England with children of their own in 1520 and there certainly weren’t any in 1595, so the logic behind the original decision eludes me.

**Whether any of the Church of England’s officials should have precedence in Wales is questionable after 1920.

***Bizarrely, in the Scottish warrant from 1905 these were called “The Scale of General Precedence” and “The Scale of Precedence for Ladies”. The ladies are therefore special, one logically presumes.

****One must wonder if the current Lord President of the Council has ever sought a bow from the prince – only to follow protocol, of course.