The latest installment in my EventBrite saga is today’s presentation to the Gloucester Branch of the Richard III Society by Annie Garthwaite, who has written a historical fiction piece about Cecily Neville (1415-1495), Duchess of York and mother of two kings.

The meeting properly began at 14:00 but the Zoom session was opened at 13:30. Cynthia Spencer, the host, said this was both to reduce the risk of interruption due to technical errors (or people arriving late) and to replicate in some way the socialisation between attendees that would occur at physical meetings. The first few minutes were thus filled with little more than awkward “Hello, hello?”s as early arrivals tested their sound systems. Garthwaite herself had to borrow an office with a fast broadband connection, her own being unreliable. There ensued a more general discussion as to the benefits and drawbacks of conducting all such meetings virtually. The ease of attendance from across a wider geographical area without a long commute was weighed against the subscription fee for the software. I opined that a virtual event’s main weakness was the impossibility of a buffet. Garthwaite recalled having virtual dinner parties – dinner for twelve people but only washing up for two! Inevitably there was talk about not being dressed below the waist.

After many more minutes of functional chatter, Keith Stenner (Chairman of the Gloucester Branch) announced that this was their first presentation of a fiction book. Garthwaite said that she had inherited her mother’s obsession with historical fiction and that her history teacher would pass books along to her. She was particularly enthralled by We Speak No Treason and developed an infatuation with Richard III – one obviously unrequited if for no other reason than the monarch having died five centuries prior. 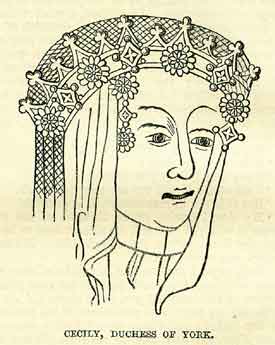 Likeness by unknown artist circa 1540.

Cecily, the speaker noted, was born in the year of Agincourt and died in the reign of Henry VII. She was the only main protagonist of the Wars of the Roses to personally live through the whole of the conflict period, and spent much of that time as the most powerful woman in England save the queens themselves.

Garthwaite read out an extract from her book, set in Rouen in 1531 with Cecily observing Joan of Arc’s execution.

Returning to her background, she mentioned that she had long been familiar with other important women from the period – Margaret of Anjou, Margaret Beaufort, Elizabeth Woodville – and blamed Shakespeare for Cecily’s comparative obscurity. In his plays the duchess appears old, pious and dull, with few lines and little agency. Our guest went into an explanation of her subject’s childhood and courtship, then (with some fumbling around the screen-share function) showed us a simplified* diagram of Richard of York’s ancestry to demonstrate how he came about his multiple peerages as well as his two claims to the throne. She noted that, despite Richard clearly receiving royal favour at various points, he was always under suspicion from the Lancastrians.

Garthwaite said she believed Richard & Cecily to be a marriage of equals, both being highly intelligent and ambitious – Cecily was allowed to operate autonomously in her husband’s business, household and political negotiations. It was a worryingly long time before the marriage produced any children but eventually she sired eight sons and four daughters (most of whom she outlived).

Garthwaite views Cecily’s marriage as the apprenticeship to her true flourishing as a widow, noting that when her son Edward IV acceded to the throne he immediately rushed off to the Battle of Towton, leaving the duchess in charge of the royal household “effectively as regent”, with ecclesiastical and diplomatic correspondence describing her as the true leader of England.

Describing the production process, Garthwaite said she – a novelist not a historian by training – was determined to stick as closely to known facts as possible. Medieval noblewomen did not solely concern themselves with embroidery and maternity, but would be in charge of managing large and complicated household organisations. Cecily’s family conflict was examined – her marriage into the House of York pitted her against her own Beaufort cousins.

After an anecdote about Destiny’s Stone on the Hill of Tara, another extract was read – concerning the Duke & Duchess’s last day in Ireland. This ended the formal presentation. Stenner noted that the book ended in 1461 but Cecily lived to 1495, and asked if a sequel was coming. Garthwaite confirmed that there would.

Spencer then began reading out questions that had been submitted by other attendees. One was about the allegation that Edward IV was the son of Blaybourne the archer and not Richard of York. Garthwaite laughed “I knew this would come up!” and said that the possibility of an affair was gold dust for historical novelists, but she decided that the theory was too tenuous.

Another was how a writer decides which historical events to include and which to omit, given Cecily’s very long life. Garthwaite said she learned to find the junctures which enable you to tell the overall story most clearly. She also said that “Your editor always has different opinions on it than you do.”

Spencer herself then asked about the legal status of decisions made by a woman in that era, and how her household was managed during confinement. Garthwaite replied that a lady of Cecily’s rank effectively had her own household distinct from her husband’s. After her husband’s death and her son’s accession she procured for herself very substantial tracts of land. This demonstrated, in the writer’s view, that female emancipation was not strictly linear – women of Cecily’s time wielded significantly more power than their Victorian or even later counterparts.

I asked Garthwaite what she thought of Cecily’s portrayal by Caroline Goodall in The White Queen and The White Princess** – the only instance I knew of her being played on television besides adaptations of Shakespeare plays. She replied that she had not seen either series and never passed judgement on other writers, but credited Philippa Gregory with renewing public interest in that era of history. Spencer chimed in that Cecily came across as a powerful person and that “It was a weird series but there were a few outstanding performances and I thought she was very good.”. Garthwaite said that while writing her own book she could not read anyone else’s historical fiction for fear of getting their thoughts mixed up with her own. This reminded me of Daisy Goodwin, writer of ITV’s Victoria, saying she would not watch The Crown to keep her own work independent and avoid plagiarism allegations.

The congregation then began to disperse but the session was kept open for a few more minutes so that members could scribble down contact details. I plugged my blog verbally for the first time, though I wish I had got in a moment earlier as by then there were only six out of thirty-one other people still logged in.

I have read and heard about the Richard III Society before but this was my first time directly interacting with its members. I hope there may be more.

*Inevitably, for a fully-detailed family tree for the Plantagenets, Beauforts, Nevilles and Mortimers would require multiple dimensions and still look tangled.

**Notably she was the only character not to be recast, perhaps because she was already an old woman when the first series started and so did not need to be aged up.