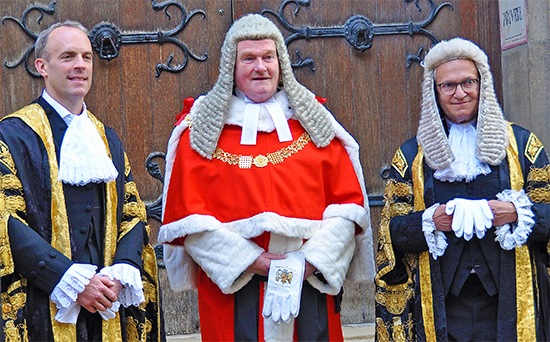 In the long-awaited cabinet reshuffle it was announced that Dominic Raab, First Secretary of State since 2019, had been appointed Deputy Prime Minister. This would appear to be the latest in a long though intermittent line of appointments to that title. On closer inspection, however, the line may not be as long as once thought. A year ago the Wikipedia page listed eight people as having held the post, with a footnote about a possible ninth. By last month, that had been revised to just three official title-holders, supplemented by alternate lists of many more unofficial ones.

The main sources for these were Vernon Bogdanor’s 1995 book The Monarchy and the Constitution, Jonathan Kirkup & Stephen Thornton’s 2015 article ‘Everyone needs a Willie’: The elusive position of deputy to the British prime minister, Rodney Brazier’s 2020 book Choosing a Prime Minister: The Transfer of Power in Britain, and the Lord Norton of Louth’s 2020 book Governing Britain: Parliament, Ministers and Our Ambiguous Constitution. The latter has been much advertised on his lordship’s blog in recent months. The differences in the lists that they give shows that there is much scholarly dispute over who can be canonically considered a deputy prime minister in this country. In addition to those who were thought to have the title but actually didn’t, there are several listed as not having the title but still performing essentially the same function.

Different authorities have different criteria for who should be counted – Bogdanor lists those who chaired the cabinet in the prime minister’s absence and chaired numerous cabinet committees, Kirkup & Thornton use a five point checklist:

Clement Attlee, generally considered the trope maker and codifier, was Leader of the Labour Party from 1935 to 1955, a period which included the 1940-1945 wartime coalition government. Churchill had him appointed Lord Keeper of the Privy Seal in 1940, then Secretary of State for Dominion Affairs in 1942, then Lord President of the Council in 1943. He deputised for Churchill in parliamentary questions and cabinet meetings, with many sources saying he essentially ran all domestic business of the government while Churchill focused on the war. Curiously the time period usually given for his tenure as DPM begins only in February 1942. The Lord Hennessy of Nympsfield asserts that George VI’s minute for that reshuffle just said “Secretary of State for Dominion Affairs” and that it was Churchill who wrote “Deputy Prime Minister” on a separate paper. Bogdanor also asserts that Attlee was never formally given the latter title by the King.

Herbert Morrison was Lord President of the Council and Leader of the House of Commons through most Attlee’s premiership from 1945 to 1951, switching to Secretary of State for Foreign Affairs in the last few months. He is counted by Bogdanor, Kirkup & Thornton and Norton but not by Brazier.

Sir Anthony Eden was Secretary of State for Foreign Affairs during Churchill’s peactime ministry of 1951 to 1955. He is considered by all the lists to have functioned as DPM, though the King did not formally appoint him as such.

R. A. Butler is counted by all, though there is dispute as to when he took office. Under Eden and Macmillan he held several overlapping posts: Lord Privy Seal (1955-59), Leader of the House of Commons (1955-61), Chairman of the Conservative Party (1959-61), Secretary of State for the Home Department (1957-62) and First Secretary of State (1962-63). Brazier considers him to have been DPM beginning in 1955 but Norton believes he only started in 1962. Both agree he ceased when Douglas-Home replaced Macmillan in 1963.

George Brown became Deputy Leader of the Labour Party in 1960 and remained so throughout Wilson’s first two governments, resigning after the general election of 1970. From 1964 to 1966 he was First Secretary of State and Secretary of State for Economic Affairs, then he was Secretary of State for Foreign Affairs until 1968. It could be a typo, but Brazier apparently still considered him to have been DPM after that despite him no longer being in government.

Michael Stewart was First Secretary of State from 1966 to 1968 then Secretary of State for Foreign & Commonwealth Affairs from 1968 to 1970, succeeding Brown in both offices. He is counted by Bogdanor as well as Kirkup & Thornton to have been DPM in the last two years.

Curiously none of the authors consider Barbara Castle (First Secretary of State 1968-70) to be worthy of inclusion.

Reginald Maudling had been appointed by Heath as Deputy Leader of the Conservative Party in 1965. He was appointed Secretary of State for the Home Department following the party’s election victory in 1970. He resigned both posts in 1972. Bogdanor and Brazier consider him to have been DPM for two years.

William Whitelaw was Deputy Leader of the Conservative Party from 1975 to 1991, being created Viscount Whitelaw roughly halfway through this period. He was appointed Secretary of State for the Home Department in 1979, then Lord President of the Council and Leader of the House of Lords from 1983 to 1988. All the lists include him as DPM while he was in government, but are clear that he did not actually hold the formal title.

Sir Geoffrey Howe is widely considered to have been DPM from a reshuffle in 1989 until his famous resignation in 1990. He held the posts of Lord President of the Council and Leader of the House of Commons. When I commented on Norton’s blog suggesting his inclusion the noble lord replied:

Sir Geoffrey Howe was offered the title, but as he explained in his autobiography:
Charles Powell then contacted him to tell him that Buckingham Palace ‘had had a little difficulty in accepting the official description “Deputy Prime Minister” . They were proposing to follow the precedent of Eden with Churchill and use the form of words: “Sir Geoffrey will act as Deputy Prime Minister”.

Michael Heseltine, it seems, is the first to be definitively appointed Deputy Prime Minister. He held the title from 1995 to 1997 as well as being First Secretary of State.

John Prescott was the second canonical incumbent. He had been elected Deputy Leader of the Labour Party in 1994 and was appointed Deputy Prime Minister after the general election of 1997, resigning both posts in 2007. For his first four years in government he was Secretary of State for Environment, Transport & the Regions. Thereafter he was First Secretary of State.

It is another curiosity that none of the lists include anyone for Gordon Brown’s premiership, even though the Lord Mandelson (First Secretary of State and Lord President of the Council 2009-2010) was widely considered to be DPM for the last eleven months of New Labour.

Nick Clegg, Leader of the Liberal Democrats throughout their coalition with the Conservatives from 2010 to 2015, was the third canonical DPM. He was also appointed Lord President of the Council and Minister for Political & Constitutional Reform. He regularly stood in for David Cameron at Prime Minister’s Questions.

William Hague was First Secretary of State through the same period. He was the second Conservative in the cabinet hierarchy and answered Prime Minister’s Questions when both of his superiors were absent. He was the senior member of Cameron’s shadow cabinet and so probably would have been DPM had the party won outright in 2010.

George Osborne was First Secretary of State and second in the cabinet ranking during Cameron’s second government of 2015 to 2016. He answered Prime Minister’s Questions in Cameron’s absence.

Theresa May did not appoint a DPM for FSoS during her first ministry. Most seem to have assumed that Philip Hammond (Chancellor of the Exchequer) was deputy by default. When she missed PMQs on 7 December it was David Lidington, Leader of the House of Commons, who stood in for her.

Damian Green was appointed First Secretary of State and Minister for the Cabinet Office in June 2017 but had to resign in scandal in December. He was second in the cabinet ranking and deputised at PMQs.

David Lidington was Chancellor of the Duchy of Lancaster from January 2018 to July 2019. He was second in the cabinet ranking throughout despite not holding either of the usual titles. He again deputised at PMQs during this period.

Dominic Raab was appointed First Secretary of State and Secretary of State for Foreign & Commonwealth Affairs in July 2019. He resigned both posts this month in favour of Deputy Prime Minister, Lord High Chancellor of Great Britain and Secretary of State for Justice. Bizarrely many press sources called this a demotion. He took charge of the government last year when Boris Johnson was in intensive care, and has deputised at PMQs many times, including last week. He would appear to be the fourth canonical DPM, having the title in Hansard as well as in government publications (no Gazette mention yet). Oddly the cabinet rankings until recently had him below the Chancellors of the Exchequer (Sajid Javid, then Rishi Sunak) and the most recent list of cabinet committees showed he wasn’t chairing any of them.

One might reasonably be wondering at this point as to the constitutional distinction between Deputy Prime Minister and First Secretary of State. Put simply, the latter actually exists in law. Every time a new first secretary is appointed there will be an order in council recording it, in the same way as for all the other secretaries of state. The office commands a salary in its own right and so an incumbent does not need to hold a sinecure in conjunction. This is in contrast to Deputy Prime Minister, which has no legal existence and is, in effect, simply a courtesy title given by the actual Prime Minister. Every holder of the title has simultaneously held at least one other ministerial office.

There is, though, one way in which First Secretary of State is like the Deputy Prime Minister and unlike the other secretaries of state. As I commented to Norton last year:

The main difference between the First Secretary of State and all the others is that he is a minister without a ministry. While there is an Order in Council to appoint a new First Secretary of State each time, there has never been a statutory instrument to establish a corresponding First Department. For this reason there is a little similarity with the title of Deputy Prime Minister in that leaving the position vacant has the same practical effect as abolishing it (indeed the press often don’t know which term to use), because the role cannot be proven to exist if it is not occupied.