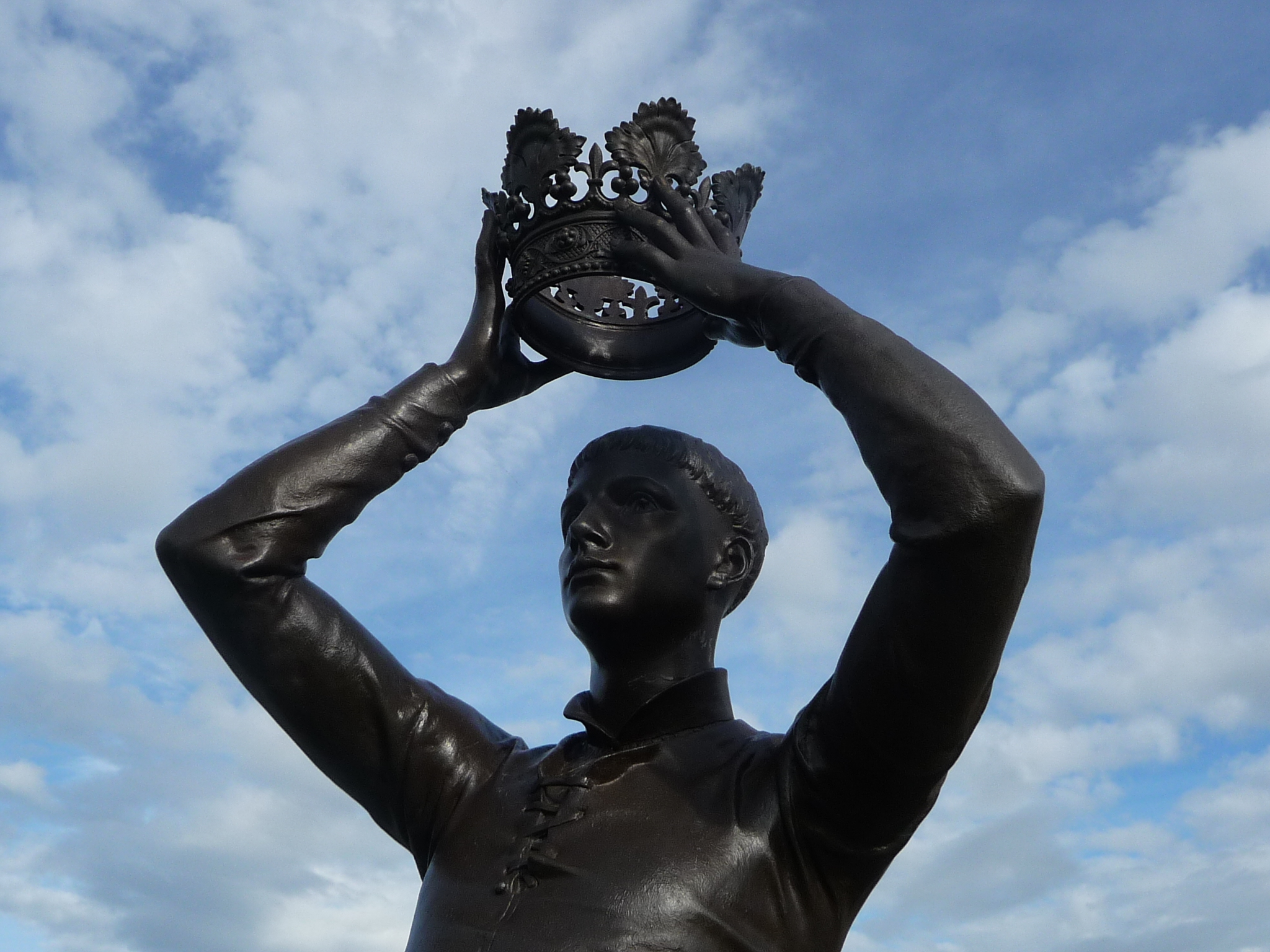 Today’s virtual lecture was by Rory MacLellan at the Society for Court Studies.

To recap for those unaware: The Lancastrian dynasty came to power in England in 1399 when Henry of Bolingbroke, Duke of Lancaster, deposed his cousin Richard II, and acceded as Henry IV. It was continued by his eldest son Henry V after 1413, and then grandson Henry VI after 1422. Richard II had no children or siblings, and Bolingbroke was his heir presumptive according to agnatic primogenture, but by the male-preference cognatic method that was the consensus then in England the throne should have passed to Edmund Mortimer, 5th Earl of March. Even if Bolingbroke’s claim had been legitimate, the overthrow (and later probable murder) of his predecessor stained him in the eyes of his people, and of God. Henry V made some efforts to atone for his father’s treason. He won the respect of the population by his glorious victory at the Battle of Agincourt in 1415, and subsequent capture of the crown of France. Henry VI was beset by mental health problems and under his weak leadership English politics fell into severe disarray, resulting in the loss of most of the French possessions he had inherited. Opposition to his government was lead by Richard, Duke of York (Edmund Mortimer’s grand-nephew and Richard II’s cognatic heir), whose own son eventually unseated Henry to become Edward IV in 1461.

MacLellan’s research concerned the manner in which the three Lancastrian monarchs were officially remembered under the Yorkist regime. They were clear that the 1399 coup was illegal and that the Lancastrian line was thus illegitimate. Each was called “King in deed but not in right”. It was easy enough to condemn Henry IV for having committed regicide, and Henry VI for losing France, but Henry V presented a challenge – all the territories his son lost were only held by England in the first place due to the supreme military, chivalric and diplomatic skill of his father, whose accomplishments are revered even to this day and which the Yorkists themselves strove to honour.

Later historians have given differing reviews of how Henry V was regarded under Edward IV’s first reign (1461-70). Jonathan Hughes found “universal respect and praise” and Russell Butcher said “one of the most successful medieval kings was difficult to criticise”, but Alison Allan said he was “usually quietly ignored” so as to maintain the Yorkist line that Lancastrian rule was a misery.

The only positive comments by Yorkists about any Lancastrian were made in the 1450s while the latter dynasty still reigned, and while Richard still insisted he only opposed Henry’s advisors instead of Henry himself. Once the White Rose had supplanted the Red the line quickly changed, with Speaker Strangeways recanting the new official version to Parliament. An act was passed to overturn the 1415 treason conviction of Richard of Conisburgh (Edward’s grandfather), saying that “a pretensed session had reached an erroneous judgement”. All other official correspondence from this time made clear that Henry had been king by usurpation. Even during Edward’s own 1467-8 bid for France, when Henry V’s legacy would have been useful, it was kept under wraps.

In Edward’s second reign (1471-83), when the House of Lancaster had been extinguished, it was politically safe for his government to recognise the personal virtues and accomplishments of Henry V though still condemning his illegitimacy. MacLellan noted that whereas Edward had been hostile to Henry VI’s establishment of Eton College and King’s at Cambridge he still patronised the religious organisations (Syon Abbey and Sheen Priory) set up by his father. Richard III also owned several books that praised Henry V, such as The Book of the Order of Chivalry (Caxton’s translation) and The Book of Noblesse (William Worcester). Perhaps Richard could be somewhat more tolerant of the Lancastrian legacy, not being the first Yorkist king.

In the Q&A the only attendees (there were but twelve of us) to ask questions were myself and Fabianpersson. He asked how Henry V was perceived by other Lancastrians, and then by the early Tudors. MacLellan said that he was revered up until the point at which his French conquests were lost, after which they simply stopped mentioning him. To lean on his glory would only have served to highlight how poorly his son was performing by comparison. Even John Fortescue’s Commendation of the Laws of England, written for Edward of Lancaster, does not mention his grandfather. Henry VII rarely brought up his namesake-but-one, except for a pamphlet around 1510 using his precedent for another campaign in France. Fabian suggested that political memory fades after 20-40 years, though MacLellan countered that the Yorkist side still brought up precedents from as early as Henry I to support their cause. Fabian also asked how Henry VI’s perception was affected by that of his father and grandfather, and how either dynasty dealt with Richard II’s own problems. MacLellan said that it was risky to criticise the foundation of the Lancastrian dynasty while it still reigned. Henry VI had the advantage that he was born into an already-established succession rather than personally being involved in its installation, and that he was well-known to be much more pious than his grandfather. The Yorkists presented Richard II as entirely blameless in his own demise. Henry V made some effort to rehabilitate him, including a reburial, but it was still to early to cede much moral ground to the former monarch without jeopardising his own crown.

I asked how the Tudor dynasty, which claimed to be the union of York and Lancaster, reconciled the competing claims of the two houses in their own official communications. MacLellan wasn’t sure about Henry IV, but said that later pamphlets were generally positive about both Edward IV and Henry V. The counterpart question to the original study- how was Edward IV was regarded during Henry’s readeption. MacLellan replied that what little had been written during Henry’s second reign was swiftly destroyed once Edward returned. He also surmised that the Lancastrians just weren’t as good at this sort of political propaganda as the Yorkists had been. I asked how long it took for historical tensions between York and Lancaster to finally subside, having heard from other historians that the controversy lingered well into Elizabeth I’s reign. He said it was slightly out of his period of study, but noted that there were still Yorkist claimants in the late fifteenth century and that it probably wasn’t until the next change of dynasty (with James VI of Scotland’s arrival) that the issue faded, though there remained a legal vaguery as to which claim was more legitimate. Finally I noted that there were many references in his own speech and in other historians’ accounts to Parliament praising whichever dynasty was then in power and condemning the one that had gone before, and asked to what extent the medieval Parliament of England simply acted to give a veneer of retroactive legitimacy to what had already happened by force. MacLellan said this was definitely the case, and that most of the parliamentary speeches that survive were written on behalf of the then-incumbent monarch so as to persuade other representatives of whatever narrative was politically convenient.