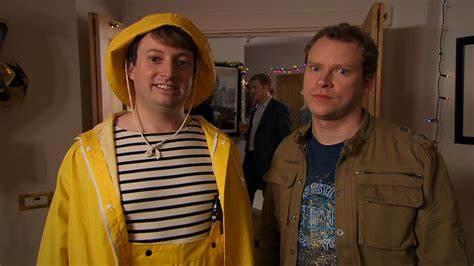 Exactly when I first saw Peep Show has slipped from memory. I recall watching New Year’s Eve when it was reasonably new, and also remember parts of Mugging from slightly earlier. I binged the whole of the first seven series on 4oD at some point before the end of 2012, and then watched the final two series as they came out.

My experience with Podcast Secrets of the Pharaohs is even more retroactive – it ended two months ago, and I only came across it last week. Blasting through the lot was made more difficult by the podcast episodes being three or four times the length of their televised counterparts, but also easier by being audio-only, so they could be played as the background to something else.

In some ways it is remarkable that a program which ended over six years ago continues to amass a dedicated following, and that so many lines from it have permeated popular discourse.

Tom & Rob’s commentary is at least as good as that by McNeil and Wang for Voyager, the main differences being that they come from one generation lower and they were not insiders when the series they are reviewing was on air. The lower-concept setting also allows that hosts to compare the events of Peep Show to their own lives. As an aside, it always strikes me as a little strange when the hosts of these kinds of review-tainment programs, whose demeanour is otherwise hintless as to age, start going on about their partners or even children. Of course, neither of them ever had to eat a partly-cremated dog, nor wrestle a burglar to the ground while hosting a dinner party, so there are limits to their personal experience. What struck me most was when they wanted to give advice to the characters, comparing the events of the episodes against merely what their own lives had been, but a surprisingly certain and definite idea of how everyone’s life at various stages is and should be.

In addition to episodic analysis, the podcast also features interviews of nearly all the significant cast members, going into great detail about their experiences with the series and their views on the characters they played.