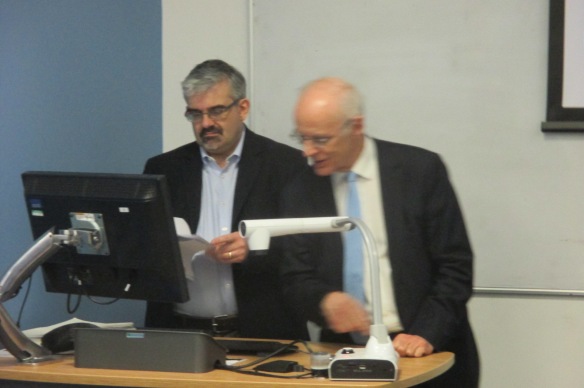 Wow, I’d never even heard of that one!

Another trilogy of outreach lectures began today. Our guest on this occasion was Martyn Atkins, Clerk of the House of Commons’s Procedure Committee since 2015. His talk was on the work of select committees within both houses of Parliament, particularly with respect to the European Union.

Atkins has given lectures of this kind several times over the last few years, and has nearly always been asked of we are out of the EU yet. Finally the answer is yes. he notes that the word “Brexit” has been banished from official communications by Her Majesty’s Governent, but hopes that he is not important enough to attract Dominic Cummings‘s ire.*

The United Kingdom’s rights and responsibilities in relation to the European Union continued from the referendum all the way until exit, and many will still continue until the end of the implementation period on 1st January 2021. Parliament’s scrutiny systems on such matters will also continue to apply during this time.

Many are still unsure as to the role of national legislatures within the European Union. The European Communities Act of 1972 gave precedence to continental law over domestic. Some had claimed that it would have been simple to repeal the act, but Atkins said this was easier said than done. He cited various statistics as to the extent of EU law – one sixth of Britain’s statute book being transposed directives, around 15% of secondary legislation being made under treaty obligations.

Atkins also referred to the “document-based system” in place, by which proposals by the European Council are sent to the United Kingdom’s Mission(formerly Representation), and deposited in Parliament for scrutiny. The government would also provide explanatory memoranda. Having left the European Union, Britain no longer has an automatic entitlement to some of these documents and must rely on the goodwill of the European Council to release them, or find out the important bits from other sources, such as the domestic governments of remaining member states with strong freedom of information laws.

The fifteen-member European Scrutiny Committee of the 58th and current House of Commons was only established four days ago. It is expected that Sir William Cash will be re-elected as chairman but this is not yet certain. Atkins said that “ministerial careers crumble before your eyes” at the committee, with particular reference to Joan Ryan and the Baroness Vadera. He also highlighted the role of retired civil servants in departmental scrutiny, noting that they “turn from poachers to gamekeepers” and know the tricks which their successors employ in order to be evasive. He also noted that the European Scrutiny attracts “a certain sort of member” but declined to elaborate.

We were then shown a summary of events in Parliament since the referendum in 2016. It was noted that Article 50 was originally supposed to take effect on 29th March 2019, but that this was then delayed until 12th April, then 31st October, then finally 31st January. Our speaker lamented that at no point had the government (in any of its incarnations) made a serious attempt to get explicit support for its position in the lower house, and that events might gone very differently had the executive and legislature gone for a more consensual approach from the beginning rather than the partisan adversarialism that had actually been observed.

Our attention was drawn to a “sad” letter written on exit day by the Earl of Kinnoull (Chair of the European Union Select Committee) to Stephen Barclay (outgoing Secretary of State for Exiting the European Union). Ministers are no longer required to attend the committee, but scrutiny will continue on matters deemed importance.

Returning to the Commons, it was noted that what used to be the Exiting the European Union Select Committee has been reconstituted as the Committee on the Future Relationship of the European Union. Hilary Benn continues to chair, but the composition has changed to reflect the general election results – there are now eleven members from the Conservative & Unionist Party, seven from the Labour Party and two from the Scottish National Party. The committee will cease to exist altogether on 16th January 2021.

That was the end of the speech. There followed the usual buffet lunch, after which we reconvened in another nearly-identical lecture theatre for topical questions. It was not possible to record the questions and their answers in full but the gist was as follows:

What are relations like between government and the select committees? Ministers are desperate not to be seen getting things wrong. If the chairman is from the opposition, or even a member from the government side who isn’t entirely on board with the frontbench’s positions, then departments might be reluctant to let ministers attend. Ex-ministers on committees – notably Jeremy Hunt for Health & Social Care – can be very forensic as they know the departments better than anyone else.

Should a Northern Ireland party have a seat on Benn’s committee? The Democratic Unionist Party was really quite influential on the committee during the last Parliament, but their power has waned now they are no longer needed for the government’s majority. Labour or even the SNP could have given up one of their seats for the Social Democratic & Labour Party, with whom they share goals.

Is the committee system fulfilling its bipartisan purpose? Select committees should operate on consensus to scrutinise government regardless of political colour, but the system in recent years has been under strain like never before.

Do you recommend any further reforms to select committees? It would be a mistake to regard the 2010 reforms as the final word. They were a response to the expenses scandal and were meant to be ongoing in the long term. You never quite know what’s going on with committee elections. The SNP are remarkably disciplined in getting members on committees, almost as if they have one candidate for one vacancy. Some MPs are frustrated that their fame outside Parliament (because they were, for instance, senior military officers or directors of large companies) may not be recognised inside and so lesser-known members might not get onto committees to which they would be suited.

[Professor Norton interjected that some committee seats are more desirable than others, with the less popular ones often spending a long time begging for vacancies to be filled until eventually backbenchers are pushed forth. Atkins agreed, and said that since the election the Conservatives took a long time to decide whom their nominees were going to be, and that in some cases this delayed the formation of committees which might have been able to start business even with empty spaces.]

*This remark struck me as a little confusing, since Mr Atkins is employed by the House of Commons and not by the government, so should be outside the jurisdiction of a Downing Street adviser.