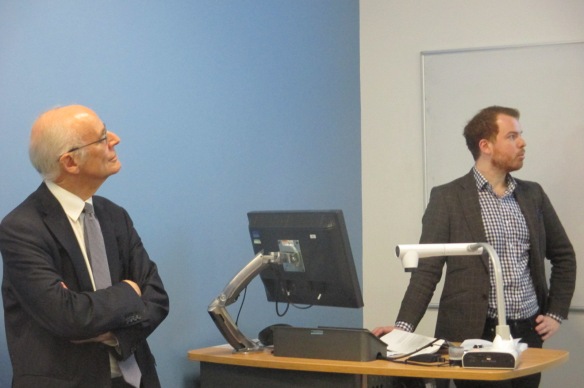 I should start doing caption contests with these.

Dr Adam Evans, Clerk of the Welsh Affairs Committee in the House of Commons, gave the second talk of the term. He commented that he was impressed by the turnout for a discussion of this kind by undergraduates on a Friday, especially given how many public gatherings were being disrupted by the recent pandemic.

Dr Evans was careful to note that, whatever the practicalities or political considerations, devolution is distinct in law from federalism – the devolved institutions are created on the UK Parliament’s authority, rather than vice versa.

Devolution, he noted, has been asymmetric, with different regions having different levels of devolved power. The Scottish Parliament has near-complete autonomy, with social security being the only notable area of domestic policy reservation. The National Assembly for Wales is a little more restricted, lacking control of police and the judiciary. The Northern Ireland Assembly has more complicated arrangements, with some matters “excepted”, others “reserved” and the rest “transferred”. In England there is not devolved parliament, but there has decentralisation of certain powers to local authorities and the creation of regional ones. Devolution is considered “a process, not an event” and occurs as a pragmatic response to political pressures rather than according to anyone’s master plan. There were disagreements as to what would be the outcome of the devolution process – some hoped it would kill off nationalist movements which threatened the continuation of the United Kingdom, others feared it would embolden them.

Whereas the House of Commons is elected by first past the post, which normally delivers a majority of seats for a single party, the devolved legislatures have varying forms of proportional representation, which normally make this impossible. Scotland and Wales use the additional member system, in which constituency results are balanced out by regional lists. In Wales the executive has always been formed by the Labour Party, going in and out of coalitions with the Liberal Democrats and Plaid Cymru depending the balance of power. Lib-Lab coalitions also governed Scotland for the first eight years, but for the National Party has ruled for the last thirteen years – five of them with an unexpected parliamentary majority. Northern Ireland’s setup demands a power-sharing agreement between the largest Unionist and Nationalist parties, with official opposition legally impossible for some years. The latter situation has frequently been unstable, most recently with the Renewable Heat Incentive scandal that put the assembly out of action for almost three years.

Our guest talked a little too slowly, resulting in our session being interrupted by the arrival of the next class before his presentation had finished. We adjourned during pleasure as before – though not all of the buffet arrived on time and we were staring at an empty table for a few minutes – then he finished his speech in the question period by looking at Westminster’s role in the process. He noted that the Commons had adopted English Votes for English Laws in 2015, which had added a grand committee stage to certain bills which did not affect Scotland or Northern Ireland. He said that in most cases this was a mere formality, and the time needed to set up the chamber for the grand committee was greater than the time for which the committee actually sat. He also recalled SNP members being rather loudly disgruntled with the arrangement. He also looked at the constitutional guardianship role of the Lords and suggested they were in effect the chamber for the union.

[This slide reminded me of certain passages I read some time back about British politics during the nineteenth century, in which it was considered that the colonial parliaments – and indeed the British – should only have a lower house, with the Lords becoming the upper house for all of them. Obviously this policy was never enacted.]

Questions and answers are broadly summarised as follows:

Will there be a one-Yorkshire devolution deal, replacing Dan Jarvis’s Sheffield City Region? There is no great appetite for it. A proposal was made for devolution to the north east but it was rejected.

Will there be a resolution the representation of nationalist parties on regional committees in the House of Commons, and the Committee on the Future Relationship with the European Union, or does the government think it can do what it wants now it has a majority? The Future Relationship committee is only due to exist for one year so its composition won’t be that important. As for Scotland, the SNP chair might decide to hold all the meetings in Scotland, knowing it will be impractical for English Conservatives to fly north two days a week.

For the “leveling up” project, wouldn’t it be better to give greater powers to existing local authorities rather than creating new assemblies? There has to be a balance between devolution and centralism. The UK government doesn’t want to give so much away that its own authority is undermined. The treasury has been happy to let local councils set business rates, but less keen to devolve other tax-raising powers. Notably Margaret Thatcher abolished metropolitan county councils because they were using their powers to impose tax policies that were contrary to her will, and in some cases illegal. There’s also the risk that if you give powers to the north then the south will start wanting them as well.

As is becoming a trend, I asked the final question of the sitting. Jumping on the points made in the answer given just before, I enquired as to the sustainability of the last twenty years’ devolution policy given the tendency towards competitive nationalisms in different regions – would devolution tend to a point where all parties and groups were appeased, or would the lower administrations continue demanding more and more powers be ceded until the central government had nothing left?

Evans replied that the current trend was not sustainable, pointing to similar goings-on in Spain. He noted that the Scottish Parliament was probably the most powerful provincial legislature outside the Swiss Cantons, yet the National Party still continue to insist on devolution going further. He brought up a request for Scotland to have a separate immigration policy, given its demographic differences from the rest of the UK. He also said that devolutionary politics depend on who is in power in which place, and that voters may eventually get tired of continual constitutional debates. He said that the central administration recognises the need, much of the time, to reject calls for further concessions, but that sometimes it was politically impossible to resist. If, for instance, the last general election had resulted in a Labour minority government, it may have been dependent on SNP support and therefore compelled to allow more powers to be devolved to Holyrood. The main point, Dr Evans said, is that since 1949 the UK has accepted the principle of self-determination: that if a people really don’t want government by Westminster then they cannot feasibly be forced to accept it.