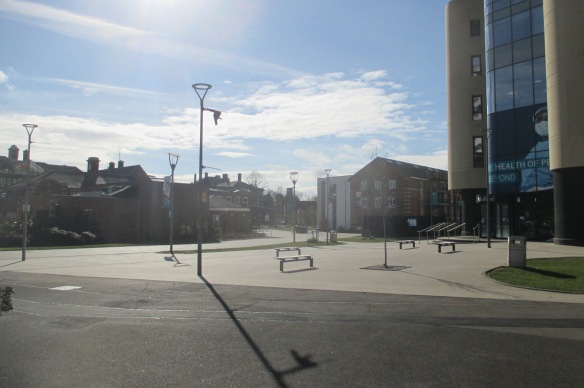 Darn, just as the weather was getting nice!

Last night an announcement was made by our Vice-Chancellor, Professor Susan Lea, that all lectures, seminars and tutorials would be suspended with immediate effect. There will be a managed transition to having all teaching and assessment online. Faculty are also being phased into working from home. People who are over seventy years old and/or have underlying health conditions have been advised to avoid the campus. Cleaners are being sent around all student accommodation to disinfect surfaces and door-handles.

This follows a statement by the Prime Minister advising the public to minimise non-essential travel and social contact. We are still allowed to go outside for exercise, albeit with the proviso that we should keep a safe distance from other people.

Already for some weeks we have been buffeted by regular official updates about travel restrictions and general cleanliness. Several lecturers have also been preemptively redesigning their courses in case they had to do everything by correspondence. While typing out this post I was notified by two lectures and the vice-chancellor herself that end-of-semester examination timetable has been abandoned and that the final module assessments are being rewritten completely to adjust to the new circumstances.

For some, myself included, this new regime does not represent a major upheaval. Those who are accustomed more active and intimate social lives may find it difficult to adjust so suddenly to a life of solitude. I also have the benefit of being in early adulthood and without any obvious pre-existing pulmonary or respiratory weaknesses. All things considered I appear for the moment to be fairly optimally positioned in terms of surviving this pandemic without serious harm and my experience in the coming months could be quite luxurious compared to what many others will have to suffer.

Thus far the suspension of teaching activity has not been accompanied by a quarantine of the physical premises. Obviously there is no outer wall around the entire campus, but at some point it is not inconceivable that the individual buildings could be locked down. I went on a lone stroll some hours ago and could see that while overall activity was diminished the place was not entirely deserted, with some groups of students still milling about as normal. The Brynmor Jones Library is still operational, but only on a nine-to-five basis rather than all day and all night as was much advertised before. Notably the shops and restaurants are still open. I have not spent enough time in the student union bar over the years to know if it is normal for the televisions to be showing the Health & Social Care Select Committee in the House of Commons or if this is a new development.

Who could have expected Jeremy Hunt to become so popular among the youth?

Speaking of Parliament, the speakers of both houses have made their own announcements restricting access to the Palace of Westminster, after at least two MPs tested positive for SARS-CoV-2 and several others have gone into self isolation. For some weeks I had been contemplating posting an article entitled The 58th Parliament – A Return To Normalcy? concerning how, following the general election, some stability had returned to British politics after years of ever-escalating chaos. Obviously that has been jossed now. Yesterday on the way to a lecture (my last for some time, it transpires) I found myself beside Professor Norton, and reminded him of a similarly premature sentiment he had expressed on his own blog in January. I asked him if there were any plans to evacuate the House of Lords – given its high concentration of the over-70s**, and expressed surprise that the younger Commons had suffered first. His lordship explained that peers do not have MPs’ constituency duties, nor so many personal staff, which means they are not exposed in the same way and can isolate themselves more easily. He acknowledged that members of the upper house still have the problem of sharing cramped parliamentary office spaces, but said this is not necessarily a problem so long as the rooms are kept reasonably clean. He said it was likely that parliamentary committees would, like universities, be doing most of their work remotely while plenaries in the main chambers would be cut down and minimally attended. This could mean that new legislation, perhaps excluding emergency laws relating to the pandemic itself, is postponed for some time. I asked if this made a nice change from talking about Brexit all the time. He remarked that if anything he had become nostalgic for 2019.

For this blog, the most immediate consequence of the new policy is that Friday’s scheduled conclusion to the second trilogy of parliamentary outreach lectures – featuring Simon Burton, Clerk Assistant to the House of Lords – has been cancelled. I have not yet checked but it seems a safe bet that any future Inspired in Hull events will be on hold until further notice too.

* I have long suffered various skin conditions, but the main consequence is that I have always been carefully washing my hands several times a day.

**We joked that Norton himself, at 69, is still in the younger half.