His Royal Highness Prince Philip of Greece & Denmark was born on 10th June 1921. He was the only son of His Royal Highness Prince Andrew of Greece & Denmark, who in turn was a younger son of His Majesty King George I of the Hellenes. Through his agnatic line he was a member of the House of Schleswig-Holstein-Sonderburg-Glücksburg, while his mother Princess Alice was from the House of Battenberg. Queen Victoria was his enatic great-great grandmother.

Philip’s titles have an interesting history, in that he was born a prince of Greece and of Denmark but later renounced these titles to obtain British citizenship. This move later turned out to be unnecessary as the Sophia Naturalization Act 1705 meant he had British citizenship already. He adopted the surname Mountbatten, which was used by his maternal uncle Louis (later Earl Mountbatten of Burma) and represented an Anglicised version of Battenberg. The subsequent controversy over whether his descendants should be the House of Windsor or Mountbatten-Windsor is a little ironic given that Philip himself was already effectively going by his mother’s maiden name rather than his father’s. 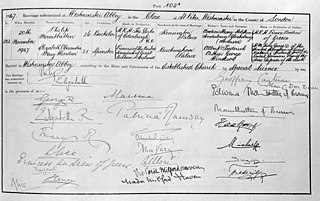 New titles were bestowed rapidly in advance of his wedding: On 19th November George VI appointed him a Royal Knight of the Garter (one day after The Princess Elizabeth, to maintain her seniority) and granted him the style of Royal Highness (on British authority this time), then on 20th raised him to the peerage of the United Kingdom as Duke of Edinburgh, Earl of Merioneth and Baron Greenwich – all of which now belong to his eldest son. The lack of simultaneity between these events means that for a single day he was styled “Lieutenant His Royal Highness Sir Philip Mountbatten”. On the 21st his title was inserted into the Book of Common Prayer. He was ceremonially introduced to the House of Lords on 21st July 1948. For a while there was some controversy over whether or not he was a prince. This was resolved on 22nd February 1957 when his wife, now sovereign, made him a Prince of the United Kingdom of Great Britain & Northern Ireland, which put him level with her sons and uncles. There were some suggestions of making him “Prince Consort” like Albert or “Prince of the Commonwealth” to reflect the monarchy’s larger purview but these were ultimately turned down.

His precedence at this time is unclear, though obviously the lowest he could have ranked was as the newest ordinary duke. A royal warrant on 26th September 1952 declared his should “upon all occasions and in all Meetings except where otherwise provided by Act of Parliament have, hold and enjoy Place, Pre-eminence and Precedence next to Her Majesty”, which again followed the example set by Victoria with Albert. This technically made him second man in the land, for the monarch is always first man even when female, and is the reason he was often seen walking two paces behind his wife on formal occasions.

Philip’s heraldic status in his youth is not clear to me, but as a British adult he was – rather unconventionally – given two grants of arms. In 1947 his armorial achievement showed the arms of Greece surmounted by those of Denmark, which in turn were surmounted by those of his great-grandmother Alice (albeit omitting the Saxe-Coburg inescutcheon she used, which the British royals had abandoned in 1917). For reasons difficult to uncover these were deemed “unsatisfactory” so in 1949 the shield was replaced by a new quarterly version. The first quarter showed the lesser arms of the Kingdom of Denmark, the second quarter the white cross of Greece, the third the black and white stripes of Battenberg and the fourth a castle on a rock for Edinburgh. That last part is especially unusual as peers’ shields do not normally incorporate the municipal insignia of their nominal territories. These arms were of course rendered as a rectangular flag (confusingly called a royal standard, even though “standard” refers to a very different style of flag) and a square banner above his Garter stall at Windsor. In composing this article I also discovered that he had a badge, showing the castle surmounted by a princely coronet and encircled by the Garter, though I do not recall ever seeing it in use. Livery colours are not so prominent in modern times, and those of the royal family no longer change with the dynasty. Philip had his own personal livery of “Edinburgh Green”, used for his personal cars and the uniforms of his staff. 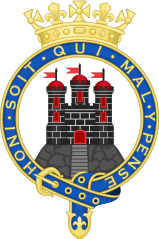 Sodacan has of course illustrated all of these for Wikimedia Commons, and already I have spotted several instances of his illustrations being used in television coverage of his death as well as in reports online.