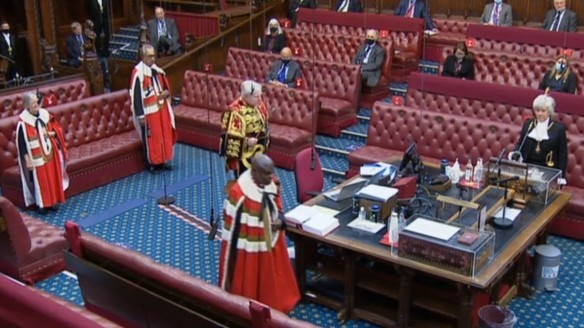 It was not the norm for bishops to retire. They could be translated to another – preferably more senior – diocese, but one they reached the upper ranks they would expect to serve until death*.

Change began in 1928 when the octogenarian Randall Davidson, Archbishop of Canterbury since 1903, decided to step down. He had been one of the Lords Spiritual since his appointment as Bishop of Winchester in 1895 and two days after retirement was reintroduced to the upper house among the Lords Temporal (Baron Davidson of Lambeth, of Lambeth in the County of London). His successor, Cosmo Gordon Lang, retired in 1942 and was likewise ennobled. There was a break in the new trend when William Temple died suddenly in 1944**, but after that the next six (Fisher, Ramsay, Coggan, Runcie, Carey and Williams) were granted baronies after stepping down. The Ecclesiastical Offices (Age Limit) Measure 1975 imposed an obligation for each bishop to retire upon his seventieth birthday. Justin Welby must therefore relinquish his post on 6th January 1926.

The first Archbishop of York to resign voluntarily was William Maclagan in 1908. He died two years later as a commoner. Four of the next five Archbishops were translated from that office to Canterbury, three of them being ennobled as already mentioned. The exception was Cyril Garbett (1942-1955) who died forty-seven weeks after retirement, having accepted the offer of a peerage (reportedly Baron Garbett of Tongham) but not seen the patent sealed. Later Archbishops Stuart Blanch (1975-1983), John Habgood (1983-1995) and David Hope (1995-2005) were all ennobled shortly after the ends of their tenures.

John Sentamu‘s timeline was rather more drawn out. His retirement was announced on 1st October 2018 but did not take effect until 7th June 2020. When the dual honours lists were announced on 31st July there was some consternation that he had not been included. The list released on 22nd December did include him, but it was not until 27th this April that his barony was conferred. Today, nearly a year after leaving the house he was finally introduced. I had expected him to have other former bishops as his supporters (e.g. Carey of Clifton and Chartres) but instead he chose Lady Hale of Richmond and Lord Popat.

Two things struck me about the ceremony. First was the presence of Thomas Woodcock as Garter King of Arms, which surprised me as the College of Arms also has a retirement age of seventy and his is thus five days overdue. The second was that Sentamu, along with so many other peers introduced this year and last, got a little too close to the Lord Privy Seal.

Long before the pandemic it was the norm for the front benches on either side of the chamber to be left empty during an introduction ceremony. I presume this is to reduce the risk of the robed newcomer tripping over other peers’ legs. Ministers tend to wait by the doorway at the right of the throne (leading to the Content lobby) and greet the new peer as he leaves the chamber. This I have seen taking place at a great many introduction ceremonies and I find it quite alarming that often the new member gets right up to the leader of the house’s face without either wearing a mask and in many cases they even shake hands. That nobody else apparently notices this glaring breach of COVID-safety protocol is a real headscratcher.

*There have been rare cases of bishops being deposed for political reasons.
**He was the son of Frederick Temple, Davidson’s predecessor and thus the last in the regular line of those dying incumbent.