Today I virtually attended the Alan Watson Memorial Lecture by the Heraldry Society of Scotland, focusing on the coats of arms of Britain’s railway companies since Victorian times.

Before the presentation proper, Edward Mallinson gave a speech commemorating Alan Watson himself – a heraldist, philatelist and trainspotter who died last year.

Gordon Casely added to the tributes, then began his lecture. He noted that the society had never covered railway heraldry in its lectures before, and insisted that “to sample the pleasures of such heraldry, one doesn’t need to be a railway enthusiast, far less a loco-spotter, number-bagger, rivet-counter, or even an anorak. Casely himself had been a railway journalist in the 1960s, and in later decades a campaigner for higher quality rail services in Scotland.

He prefaced his historical tour was a health warning – railway heraldry is an absolute mess, almost all being borrowed, bogus or thieved. He also said that much of it amounts to heraldry we don’t really deserve – badges, totems, insignia, emblems, motifs or devices, rather than coats of arms. As to why this had occurred, he suggested that Victorian-era Lyons and Garters had both “missed their trains” when it came to “the heraldic iron horse”. He said that he had examined over two hundred sets of heraldic devices used by railways in Britain, and could count on his fingers the real coats of arms. Still, railway heraldry was always interesting and entertaining. 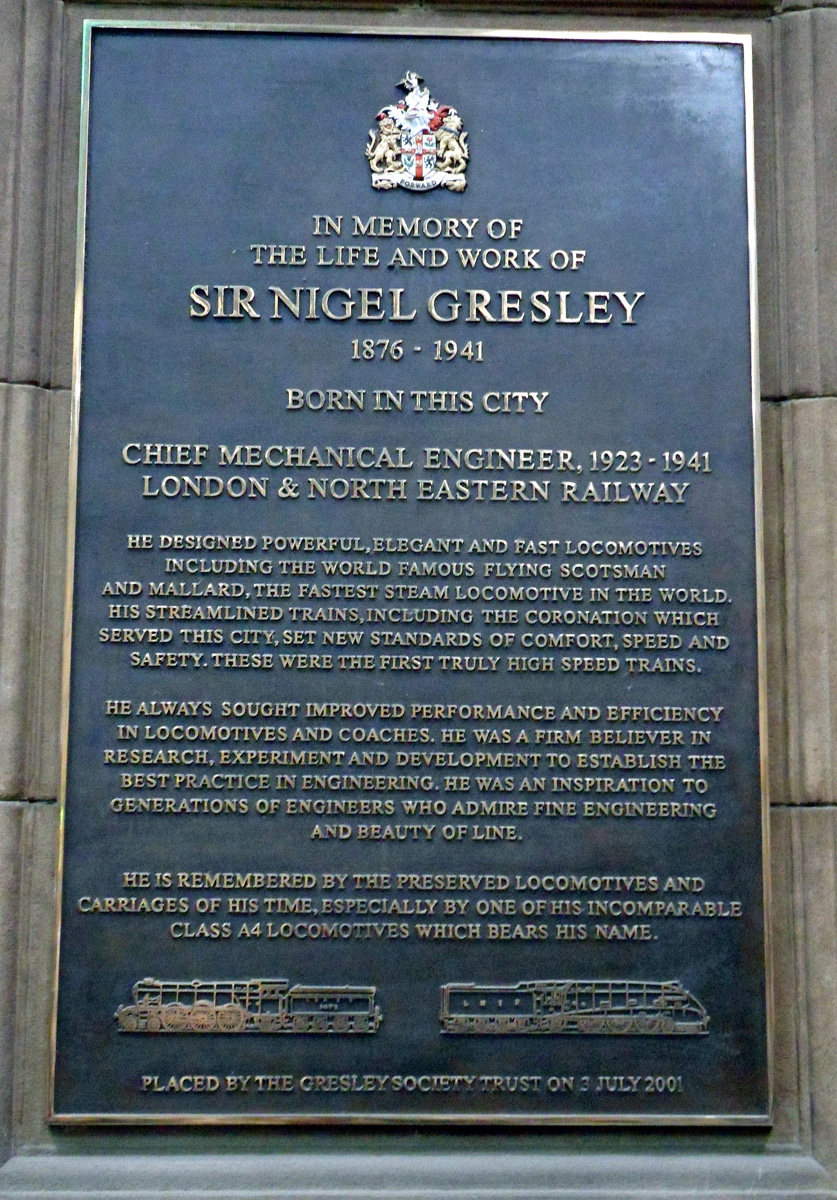 His first example was a plaque at Edinburgh Waverley station commemorating Sir Nigel Gresley. The coat of arms above the text is that of the London & North Eastern Railway (real and legal, unusually), rather than Gresley’s own.

In the next slide, I am sad to say that our speaker made an error. He showed my illustration of the arms of the Gooch baronets of Benacre Hall, although he attributed them to Sir Daniel Gooch, 1st Baronet of Clewer Park and Chairman of the Great Western Railway. He compared these to the arms to those displayed on the stall plate of Major John Gooch in the chapter room of the Order of St John, and thought it curious that the latter’s arms contained railway references (a wheel in centre chief and on the crest) while the former’s did not. Having checked in Burke’s, I can say that the arms of Sir Daniel and his successors do contain those elements, and that Casely was simply using the wrong image.

The vast majority of railway arms showed a shield within a strap and buckle. Within the Scottish clan system, such an arrangement marks that one is a junior member of the group rather than the chief, and thus the captains of industry were making themselves look like mere corporals. Of the five major railways in Scotland circa 1920, four used a buckle around their main emblem while the Caledonian Railway simply copied the pre-1603 royal arms of Scotland. Scottish railways in modern times are no better. Casely recalled writing to the chief executive of the Great North Eastern Railway in 1996 suggesting arms be adopted. What resulted was, in Casely’s words, “a real fruit salad”, featuring two oval shields within a strap and generic Scottish floral emblems crammed between. Particularly bad was the logo of the English, Welsh & Scottish Railway, which instead of the unicorn represented Scotland with a stag more appropriate to Northern Ireland. A case study was made of the Deltics (“a proper locomotive”, Mallinson interjected). An earlier plan was for this class to be called Heralds, with individual vehicles named after specific heralds (i.e. Albany, Rothesay, Ross, Orkney, Marchmont and Stirling, plus Glasgow).

Moving down to England, the Great Western Railway used the “entirely bogus” emblem simply placing the arms and crests of London and Bristol side by side, even though the line ended at Paddington and never penetrated the square mile. The Lancashire & Yorkshire Railway borrowed the shields of the two county towns, while an early emblem for the Hull & Barnsley Railway used an ermine pavillion based on those employed (incorrectly even then) by peers of the realm. Casely was particularly contemptuous of the Cornwall railway, whose seal used the shield of the Duchy, ensigned it with the heir apparent’s feathers, and shoved some industrial tools behind it. A smorgasboard of other railway emblems was shown, most following the trend of simply stealing the civic arms of their connected towns or badges of the royal family. 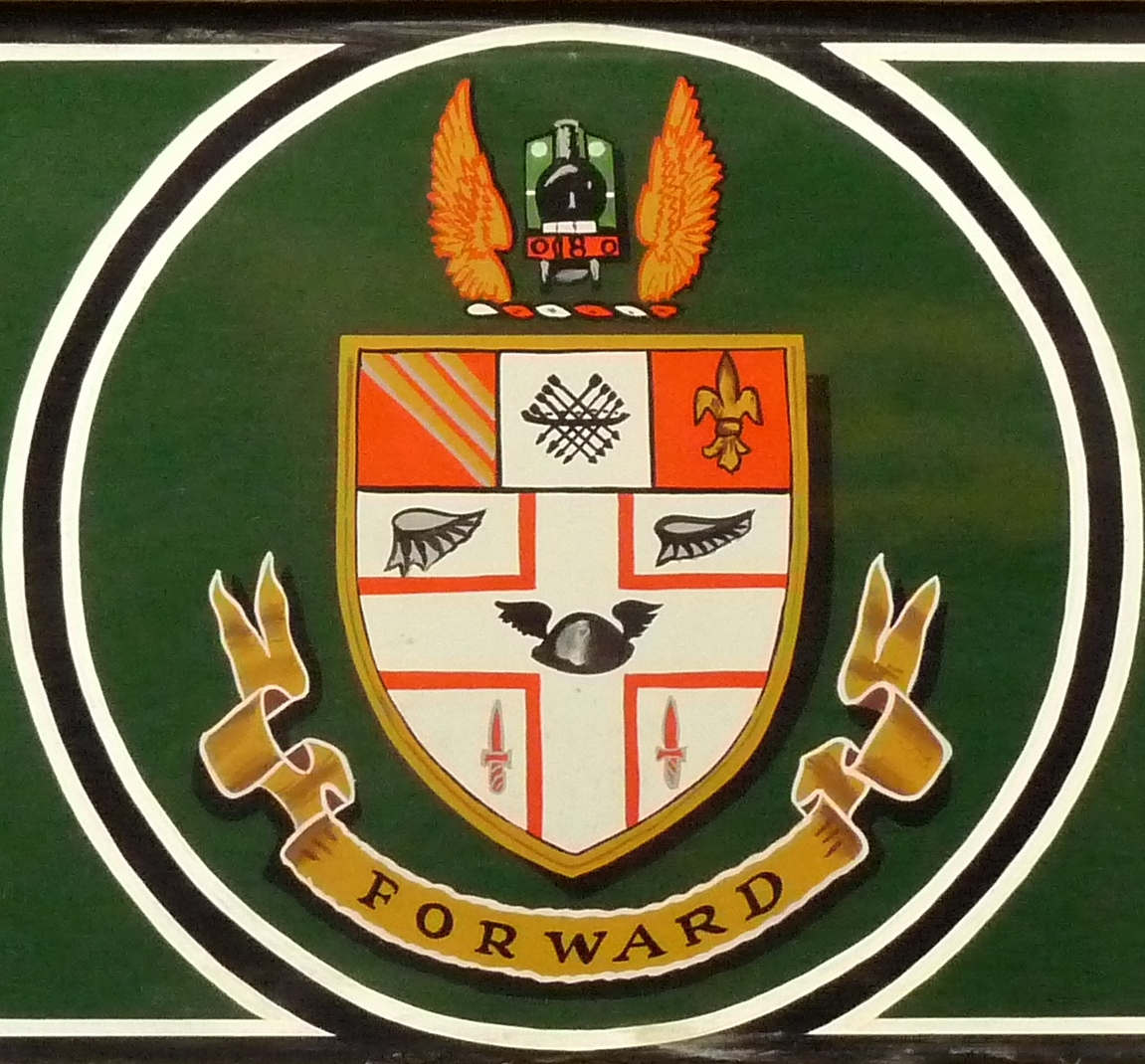 At last some “real” heraldry was featured – the Great Central Railway matriculated from the College in 1898, making it likely the first railway in Britain with legal heraldry, and used them on just about everything.

Arms were adopted for British Rail following nationalistation in 1948, technically those of the British Transport Commission. The crest alone was used on a roundel on the sides of many trains. Two versions of this were used – with the lion facing either dexter or sinister depending on which side of the train you stood. Allegedly Garter Bellew went apoplectic upon realising this. The famous cycling lion was similarly reversible.

Casely also mentioned that a handful of lines never used any kind of emblem – such as the North Sunderland Railway which he personally visited in 1951. His conclusion was that though railways have long used a large selection of emblems, badges and other quasi-heraldic insignia, the majority of it would not be heraldry as we know it. He wondered if heraldists had “some work to do” in convincing modern rail companies to seek legal grants of arms.

This was, by the speaker’s assertion, the society’s first in-person lecture for eighteen months. A hybrid system was in place, with an uncertain number of people sitting in the lecture hall and two dozen (including myself) attending virtually. What annoyed me about this setup was that all of the virtual attendees had been forcibly muted and the chatbox was disabled. Members physically present were invited to ask questions at the end of the presentation, but we had no ability to interact. This was a deep disappointment as I was keen to advertise the island armory post that I published a week ago. The only function I found still working was the “raise hand” button, which I and one other attendee used, but I never got to see if this was acknowledged by the hosts as while Mallinson was advertising an upcoming lecture my internet connection failed. By the time I got it working again the meeting had concluded and the session had closed.