Ever since the seventy-fifth anniversary of The Railway Series last May, I have been looking to bridge my interest in that franchise with my hobby as a heraldist. I had long known that the thin clergyman had invented coats of arms for many characters and institutions within his fictional world, but it was difficult to actually find them.

Of particular importance was a video by Max Davies, better known as Terrier55Stepney, documenting one of many visits that he and other tankies have made to the Talyllyn Railway. This particular video is valuable because at fifteen minutes and ten seconds in it shows a front-on close-up shot of an old sheet of paper on which Awdry had sketched and blazoned four different fictional coats of arms. I had glimpsed this before but never in quite enough clarity to make out the details. Even in this version the handwriting is not always legible. Luckily I found a handful of old posts on the Sodor Island Forums where other fans had also attempted to decipher the text. I have now illustrated all four shields there depicted and uploaded the results to Wikimedia Commons, though whether I shall be able to use them on any Wikipedia articles following last year’s purge is debatable.

Escutcheon: Vert a gateway kernelled Or with portcullis closed of the same. In base a glove dexter Argent.

The symbolism here is fairly obvious – the gate is a literal interpretation of the proverbial “gate” (the narrow pass in the hills between eastern and central Sodor) at which King Godred Crovan held the Normans at bay in 1089, while the glove is one of his famous white leather gauntlets.

Escutcheon: Argent in base three closets wavy Azure charged at the nombril point with a coracle therein a monk erect dexter hand raised in blessing in sinister hand a crozier all Proper.

This was the hardest to do and the least visually-satisfying at the end. The arms are pictorial heraldry, showing the legendary arrival of Saint Luoc on the island in the fifth century. There is a discrepancy between sources here – the above blazon refers to simply “a monk” but The Island of Sodor: Its People, History and Railways twice asserts that the arms have him “arrayed as a bishop”, the latter reference specifying “in cope and mitre”. I have said before that human figures usually don’t work well in heraldry, and this is no exception. Awdry does not describe Luoc’s appearance nor his liturgical vestements, so I took a drawing of St Vallier and changed the colours to give a more Anglo-Irish aesthetic, with the mitre using the blue and green shown on the other coats of arms here.

There is some obvious faux-quartering here, though at least the colour scheme works. The first and fourth quarters refer to the towns history of fishing and later ship-building while the second and third refer to the other industries based there – possibly including the big train station. 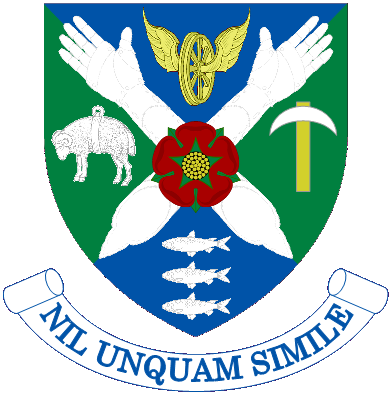 Escutcheon: Per saltire Azure and Vert two gloves Argent saltirewise in fess a rose of Lancaster Proper in chief Azure a wheel or winged of same dexter Vert a fleece Argent sinister Vert a mattock Argent hafted Or in base Azure three herrings naiant Argent.

Motto: Nil Unquam Simile (There’s Nothing Quite Like It)

The gloves are here again, though I have elongated and narrowed them to fit the saltire. The herrings also make a reappearance. The winged wheel has a long history in heraldry and has appeared in the arms of a few real-life transport companies. The fleece and mattock presumably represent agriculture and industry, both of which are serviced by the railway but do not have any more specific importance. The rose refers to Sodor’s attachment to the Duchy of Lancaster, though of course its symbolism as such is very much a modern affectation.

While we are here, let us recap the other heraldic images I have mentioned here before: 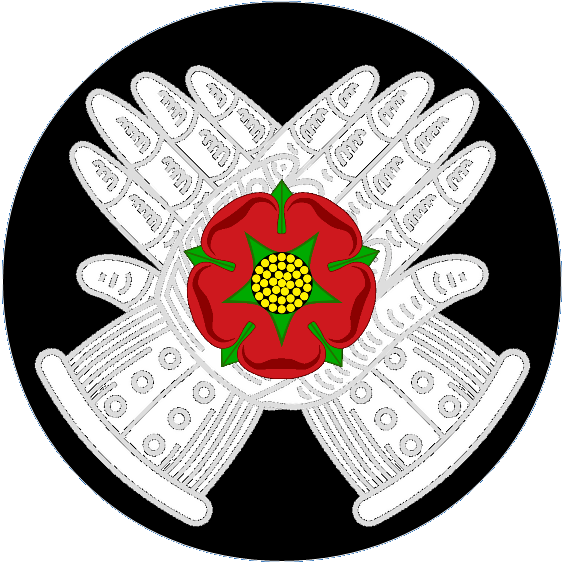 The blazon is given in the book (described as the regiment’s “colours”), though I wasn’t sure which shape to use for the field. The significance of the red rose and the white gloves has already been explained. The military is not covered much in the franchise so there is little detail to give here.

THE EARL OF SODOR

The Norramby line is mentioned in the book but nothing is said of them armorially. When the earl appears in the 2013 special “King of the Railway” his shield is Azure a pale Argent bearing a representation of Ulfstead Castle, with a jewelled Eastern crown on top and two lions rampant Or as supporters.

Taken as a whole, the Sudrian arms are a mixed bag – just as in real life. The time of matriculation for any of these devices is not specified, though we can guess from both content and context – the North Western Railway was formed in 1915 so its arms cannot be older unless inherited from one of the predecessor companies (earliest 1853). It looks a little too busy, as do those of many real railway companies from the time. The regimental badge, featuring the red rose, is probably from no earlier than Victoria’s reign. The faux-quartering on Tidmouth’s shield suggests a much more modern adoption, most likely by assumption in the mid-twentieth century. The shield of Crovan’s Gate is simple enough that it could be medieval. I am not sure about Suddery as I do not know how far back precedent can be found for the depiction of humanoid religious icons in heraldry.

I notice that blue and white seem to be the most persistent (though of course not universal) colours in the island’s civic and corporate heraldry as well as in the flag. This could be the diagetic reason for the majority of the main characters on the North Western Railway being painted blue. It would also fit the historical connections made in the source material, as blue and white were the livery colours of both the House of Lancaster and the Lordship of Ireland.

I have just discovered the website Railway Mania, dedicated to building and running model trains. A subsidiary project is Sodor Histories, an attempt at re-imagining Awdry’s island in as much detail and as realistic a manner as possible. It’s well worth a look for the truly dedicated railfan.

Looking again at Burke’s General Armory, I have found two entries (on page 467) for the surname Hatt:

Of course neither of these is necessarily linked to the Fat Controller. The only thing ‘People, History & Railways says about his origins is that he was apprenticed in Swindon – which is in Wiltshire, one county to the west from Berkshire, two from London and three from Essex.