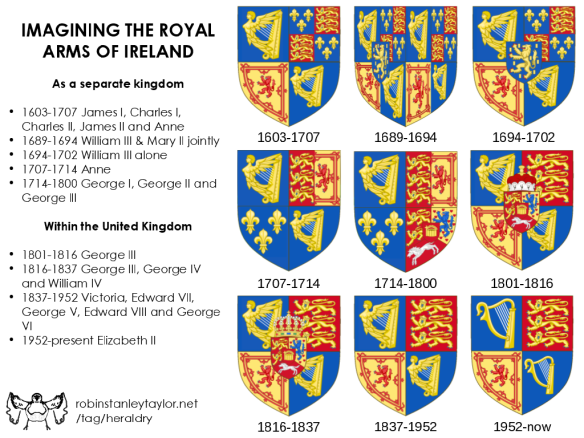 Heraldists and historians will know that there have long been two versions of the British royal arms. Prior to the death of Elizabeth I the arms of England had been three yellow lions passant guardant on a red background, while those of Scotland had been one red lion rampant on a yellow background. When James VI of Scotland ascended to the English he quartered the arms of both countries to indicate their personal union, albeit varying the precedence so that each kingdom had its own arms in both the first and fourth quarters with the other’s confined to the second. This duality continued even after the 1707 union into Great Britain, although the “English” version is the standard one used internationally, with the Scottish version being purely for internal purposes. Though the first, second and fourth quarters of the shield have chopped and changed much over the centuries, the third quarter of both shields has consistently been Azure a harp Or stringed Argent. This represented the Kingdom of Ireland since its creation in 1542, though its usage in other capacities can be traced back much further. Prior to 1603 Ireland was not referenced in the English royal arms. What is a little perplexing to those interested in this subject is that neither James nor his successors ever created a distinct Irish arrangement of the shield as he had English and Scottish ones. Instead it seems that Ireland (both before and after the 1801 union) used either the same arrangement as in England or the harp alone.

One might have expected some other curious heraldist to have come up with such illustrations by now – for the interpolation is fairly simple – but I could not find any, so set about performing the thought experiment myself. After a few hours of cutting and splicing Sodacan’s familiar pictures I had produced Irish arrangements not just of the royal arms in their present state, but for every other variation that has occurred since the union of the crowns.

There were some aesthetic challenges here, the most prominent of which is that the harp in the fourth quarter has to be significantly smaller than that in the first to fit the curve of the shield, though that would be alleviated if the instrument would face right rather than left (as in the Guiness logo). It also produces some interesting colour combinations – especially in the 1714 version where the impalement of England & Scotland lines up perfectly with that of Brunswick & Lüneburg.

Readers will note that I have only made shields here, not full achievements. That is largely because I was unsure what the other elements would be. While the crowns, supporters, mottos and crests for England and Scotland solidified long before their personal union and have been consistent ever since despite numerous changes to the shield, those of Ireland are much less clear. A crest was designed for James I (A tower triple towered Or from the portal a hart springing Argent attired and unguled also Or) but it was not much used, and neither supporters nor motto were granted at all. Occasionally depictions can be found which copy those pieces from the English achievement, but this is the result of artistic fancy rather than official sanction. I would hesitate to put the Order of St Patrick around the shield, since it was only instituted in 1783 and became dormant in 1974, never achieving the same prominence as the Garter or Thistle nor appearing much in heraldic art. Certainly the present Republic of Ireland uses the shield alone and the achievement of the government of Northern Ireland from 1924-1972 is of sufficiently different appearance and origin to be ruled out as any indication of what to use here.

On a different note, the YouTube channel Terrier55Stepney recently put out a video documenting another visit to the Talyllyn Railway. Fifteen minutes in the camera points at a framed page of drawings and blazons for Sudrian heraldic devices. I mentioned this before but this time I could see the whole page (though the legibility of the handwriting remains a difficulty). I hope to have illustrated at least some of them fairly soon.