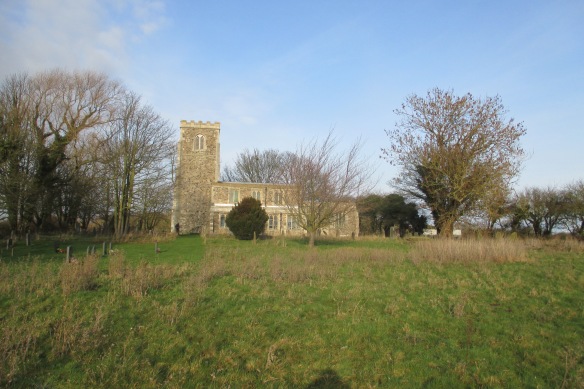 This time of year, after the end of winter examinations but before the beginning of a new trimester, is rather uneventful as far as undergraduates are concerned. I therefore have the opportunity to leave my student dwellings and go home for a week. Today my parents took me on a tour of some interesting locations in the sparsely-populated parishes of South East Holderness. I had seen many of these locations before when delivering leaflets for the Hubb, but this excursion was focusing more on the historical perspective.

Our first landmark was the Gunpowder Plot sculpture, erected in 2013 in Welwick. The sculpture depicts conspirators Guy Fawkes, Robert Caseby, Jack Wright and Kit Wright – the latter two being brothers from this village. The work was unveiled by Graham Stuart MP, whom the plaque incorrectly styles as a privy council member.

Taking up the bulk of our day was the Church of St Helen, in the parishes of Skeffling (civil) and Easington (ecclesiastical). Constructed in the early reign of King Edward IV, it held regular congregations until last summer when, after several years of dwindling audiences, the Church Commissioners decided to close it down. Inside everything looks much as one would expect: stone arches, wooden pews, and haunting streams of sunlight through the stained-glass windows (this building has no electricity, though it does have candles and what looked like gas lamps.). Though nothing was obviously missing, one could sense from the thin layer of dust on so many surfaces and the abrupt skipping of years in the guestbook that this was no longer the centre of any significant activity.

The church contained a few references to the aforementioned Wright brothers, but what most interested us, given our association with the Tower, were the many monuments to the Holme family, both verbal and heraldic. The bodies of John Holme, Esq (d. 1744) and his wife Dinah, née Burgh (d. 1729) are contained here, along with those of two sons (Henry & John, the latter being rector of Brands-Burton & Barmston) and a daughter (Margaret, Mrs Thomas Reaston). Above these large luxurious engravings are several depictions, in varying states of repair, of the Holme escutcheon – Barry of six Or and Azure, on a canton Argent a chaplet gules. The most prominent of these is topped by the Holme crest – Out of a mural coronet Gules a hound’s head erased Or – and impaled with the arms of Burgh – Argent on a saltire Sable five swans Proper.

There were many more references among the many dusty documents to the Holmes of various generations, though the task of constructing a coherent timeline is confounded by the fact that, like so many families prior to the nineteenth century, they frequently recycled the same limited pool of names and were not much concerned with consistent spelling.

Having left the church, we went in search of the sound mirror at Kilnsea. Constructed around much of the north east coat during the First World War, these large concrete hemispheres would focus the engine noise from approaching aircraft, so that advance warning could be given of imminent bombing raids. The mirrors were ultimately rendered obsolete by the invention of faster aeroplanes and later RADAR.

We did not make it to the mirror, however, because the intermediate terrain was not navigable. Much of the surrounding land has been given over to a nature reserve managed by the Yorkshire Wildlife Trust. To approach our target we had to troop over a lot of damp, thorny ground and long grass. Then there was the problem of the artificial lake. I walked along the full length of the narrow strait depicted above, but it did not quite reach the bank at the other side, and I judged the water to be a little over what I could reasonably ford – both in width and in depth. None of us wanted to risk spending the next few hours trudging about with mud-soaked legs and squelching boot-soles, so we gave up and turned back.

Our final stop, for a rather belated lunch, was at Spurn Discovery Centre. Opened ten months ago, this rather controversial building is the headquarters of the Spurn National Nature Reserve. My family have visited Spurn many times during my life, and on each occasion found it to be a slightly different shape. Coastal erosion here is very fast, due to the soft nature of the boulder clay, and the entire landmass moves two metres westwards every year. Nearly two years ago a major storm wiped out part of the road to the head, creating a tidal island. Some months earlier the trust abandoned attempts to preserve shoreline, instead planning to “let nature take its course”. Tourists are driven across the peninsula using a “Unimog” bought from the Dutch Army, but even that struggles to get across when it rains or the tide rises.

The café had a wide selection of reference books and memorabilia, most of which related to the birds and other creatures which inhabited the surrounding sand. Ornithology – despite what my name and logo may imply – is not my area of interest or expertise, so I have little to comment on these. I was rather hoping that there would be some material relating to the human history of the region, for up until the nineteenth century there were dozens of small towns dotted along this section of the coast, all now submerged by the north sea. If nothing else, I could have hoped to find some interesting heraldry somewhere.

The Holmes and Burghs:

1 thought on “The Hidden Heritage of Holderness”