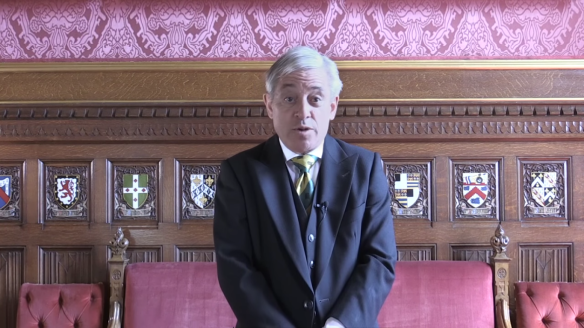 On the whole, my ideas for new Wikipedia pages have not gotten far. My template for life peers was rejected because the category was too large. My template for husbands of princesses was rejected because the topic was considered irrelevant. My plot to list all current members of the House of Commons by length of continuous service was aborted once I found that such an article already existed.

Recently, and without having received any direct notice, I discovered that one of my proposed articles had been accepted  – a list of the armorial bearings of all the Speakers of the House of Commons since 1707.

From the Acts of Union of England & Scotland (a useful jumping-on point for “British” parliamentary history, though the death of Elizabeth in 1603 could also work for the royal component), there have been thirty-three holders of the office. Each of them acquired a grant of arms during their term if they were not armigerous already. Depictions of their arms appear on small wooden escutcheons which are carved onto the interior walls of the speaker’s official residence in the Palace of Westminster.

To create a Wikipedia list of these grants seemed natural given the presence of similar armorial lists for heads of state and government in this and various other countries. Unfortunately my first submission of the list was swiftly rejected for the lack of reliable sources. Cracroft, it seems, is not considered worthy.

Scouring the subject on Google Books, I discovered a tome from 1851 which gave biographical accounts of a great many former speakers, each concluding with his blazon. It is a shame that modern publications do not consider such details so important. Speakers John Smith to Charles Shaw-Lefevre were covered thus, but their successors from the latter half of the nineteenth century were not so easily ticked off. I tried looking for biographies of later speakers, but frequently found that only limited previews were available.

Only rather a long time into my heraldic hobby did a thought occur to me which, in retrospect, should have been obvious from the beginning – that being in a university library I could find many of those same books in physical form. Sure enough a scout around the fourth floor uncovered several such books. More importantly, I also found a shelf holding several old copies of Burke’s and Debrett’s accounts of the Peerage & Baronetage.

These titles were not new to me, for I had heard and read them referenced many times in relation to matters of the British aristocracy. Previously I had understood these volumes to be address books and genealogical guides for upper class, which indeed they are. I had not, however, realised that they also functioned as an armorial database. This discovery allowed me to vastly expand my portfolio for all heraldic uploads, but in particular it gave me access to the arms of several speakers in the twentieth century.

As the names imply, Burke and Debrett detail the peers and baronets of the United Kingdom and its predecessor states. Some also document the knightage and companionage, but these entries do not include arms. This means that speakers who are neither peers nor baronets will not have their arms listed – a problem for several of the individuals being studied.

It is customary for a retiring speaker to leave the house altogether and ascend to the other place – the monarch having been petitioned by MPs to confer some mark of her royal favour upon him, and the prime minister having recommended that this be a peerage. George Thomas’s arms can therefore be located as those of the Viscount Tonypandy, as can William Morrison’s as Viscount Dunrossil. Some speakers, though, never moved from the green leather to the red. This can either be because they preferred to remain commoners (in the case of Whitley) or because they did not leave office alive (in the case of Fitzroy and Hylton-Foster). A difficulty also occurs for those speakers whose peerages were short-lived: The shelf had volumes from 1949, 1959, 1972-3, 1985 and 2000. The viscountcy Ruffside does not feature, having existed only from 1951 to 1958. The barony Selwyn-Lloyd (1976-78) was similarly absent. Of course, the deferment of elevation until one’s retirement means that no edition would include the contemporary speaker, only the emeriti. In a few cases I was helped by other Wikipedians who had access to editions which I did not, but that still left me with a smattering of omissions from the record.

As explained before, when no blazon can be found then one can only resort to replication by visual inspection. Speaker’s House is often used for public events, and pictures often make their way online. Of course, the photographers are typically not there to take closeups of the wall decorations, but in a handful of cases I was able to get a good look at the escutcheons which had previously eluded me. The shields are arranged sequentially, so that if at least one of them is already known then a viewer can count along the line to identify the others. It was an easy deduction that the Stuart-era royal arms defaced by a bendlet sinister would belong to Edward Fitzroy, agnate of the Dukes of Grafton. Selwyn-Lloyd’s could be spotted two spaces down from Weatherill’s, but the depth of field made it difficult to precisely identify the charges.

Michael Martin’s arms were a challenge to reproduce as they contain a great many non-standard charges and a motto in Gaelic, “Gorbals Mick” wishing to emphasise the proletarian lineage which set him apart from most other politicians. The display of large graphics online had become much easier by the time John Bercow matriculated his arms, so that their appearance was widely distributed by various news outlets. There is currently some uncertainty as to when, if ever, he will relinquish the chair, but it is likely that the achievements of his eventual successors will receive similar publicity.

The only remaining gaps in the list are for John Henry Whitley and Sir Harry Hylton-Foster, both of whose shields I have seen in the photographs, but too far away to capture the fine details. The latter case is especially infuriating because although Sir Harry perished as a mere knight, a barony was conferred upon his widow, Audrey – who also happened to be Ruffside’s daughter. I sought out her entry in Debrett’s expecting to see the arms of her father and husband impaled, but instead the books gave her no heraldic information at all.

As I am unlikely to be invited to the speaker’s residence in person any time soon – being not a politics student, after all – these last two items may well stay beyond my grasp indefinitely. Still, it’s nice to finally have an article I may call my own after all these years.

Late in 2019 the Chairman of Ways & Means Sir Lindsay Hoyle was elected to replace Bercow as Speaker. His father was ennobled decades ago, but I could not find any arms recorded for him. Recently I found this piece by BBC Radio Lancashire, in which Sir Lindsay muses about a future grant. He says “I’d like to think maybe a bumble bee, the busy bee… who knows? And of course, if I was to do that, I would want a Lancashire rose.” though a year later there is still no news of him getting it.

With only one week of teaching left to go before the summer exam period, we were given a short-notice summons to the final forum of this academic year. We had few new issues to discuss, so the conversation was mainly about rounding off what had been accomplished in prior sessions.

This was Isobel Hall’s last forum as President of Education. In the autumn she will be taking on the presidency of the whole student union. She expressed sadness at giving up her “baby”, but was also proud that she had managed to secure an increased printing budget for students.

Certain issues had not changed – there were still complaints that the timetable website was inefficient and that the calendar application didn’t work. The faculty hubs continued to be a target of students’ scorn.

Our deliberations trailed off at certain points whenever we were distracted by the large lemon and chocolate cream cakes which had been supplied. Our president humorously suggested that next year there ought to be a database of which sorts of confectionery would be offered at each forum so that we could compare the effect on attendance.

At the end of the session we were given coloured luggage tags to hang on a model tree – each one inscribed with what we had achieved over the course of the year. Someone managed to suggest the idea of a group photograph in front of it, though the image does not yet seem to have been released.

This is the end of the SubjectRep series. With any luck the sequel will premiere at some point in September.

There are still more types of cake to try, after all!