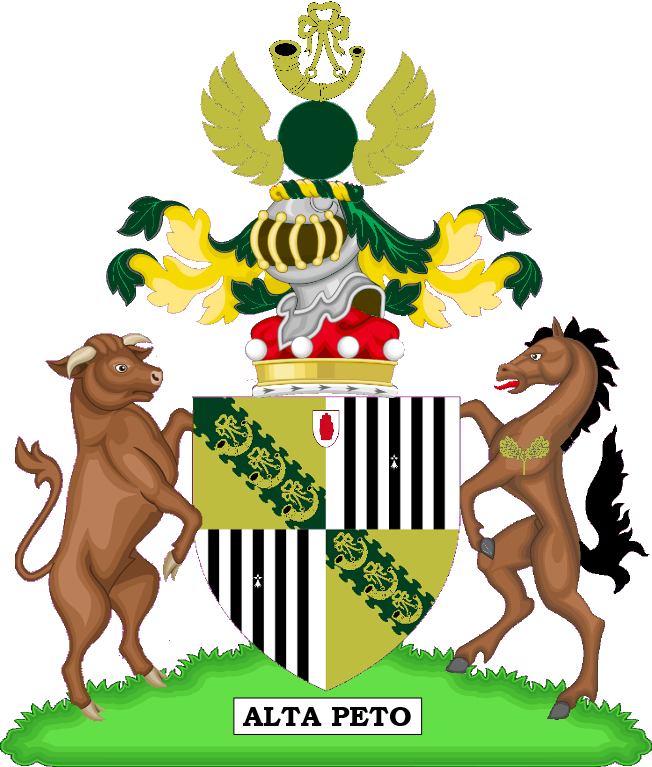 It is not entirely easy to count how many heraldic illustrations I have made for Wikimedia Commons over the years. Do I count badges separately from shields? Do I include achievements I’ve made twice? What about ones that have been deleted?

When I finished updating my gallery at the end of July the shields and lozenges collectively numbered nine-hundred and sixty-six. Over the course of August I have illustrated at least another thirty-four.

My official one thousandth coat of arms is that of the Barons Darebury, a relatively short and low-profile line of peers whose distinctions include High Sheriff of Cheshire and Chairman of Aintree Racecourse.

Having cleared this benchmark, I move onto the next project. Last year I unveiled my armorial of universities in the United Kingdom. This year I have made a similar list for the universities in Canada. This one has so far progressed much more rapidly, as Canadian heraldry is very easily searchable in the Public Register of Arms, Flags and Badges, in contrast to British heraldry which often involves a great deal of searching around for clues. The register had blazons for fifty-four fully-fledged universities, as well as twenty-nine subsidiary colleges or faculties and four related voluntary bodies.

The items in this list are organised by province, though they are not evenly spread – forty of the eighty-seven institutions are in Ontario, with the University of Toronto alone having fifteen distinct grants. Newfoundland & Labrador and Prince Edward Island, by contrast, boast only one each. Another strange trend is that Canada’s heralds seem to have been inordinately fond of sealing their letters patent on the fifteenth and twentieth days of the month.

I am struck by one major problem – although I have quickly compiled many dozens of blazons I can find illustrations for only two of them. On the actual pages of these institutions one can frequently find an image of the coat of arms copied directly from either the register or the university’s own website, claimed under fair use. Such a justification does not fly on pages such as the one I am making, so I will have to call on the aid of all Wikimedia’s great armorial artists to fill the gaps.

Early this morning I made another virtual visit to the Toronto Branch of the Royal Heraldry Society of Canada.This time the speaker was D’Arcy Boulton, Emeritus Professor of History & Medieval Studies at the University of Notre Dame, and the topic was The Development of the Forms and Uses of Supporters by the Peers of England to 1580, as shown in the Earliest Armorials of the Peerage.

The session opened with a fair amount of technological fumbling. Eventually Boulton got his slideshow going and warned us that we would be seeing a lot of manuscripts, which would be identified by collection numbers instead of by names.

We were shown a rapid succession of medieval and Tudor armorials. That by Gelre (1370-1395) was the first to display crests, followed by Shirley’s roll (c. 1450) which still mainly restricted them to foreign kings. Supporters, Boulton said, played a very small role below the level of princes prior to the late sixteenth century. There were many attempts in that era to produce books which contained a full account of the arms of the English peerage, though each omitted at least a few peers for whatever reason. It was further observed that during this time specialised helmets and coronets for peers began appearing in the records. An interesting phenomenon is the solidification of supporters as indicating noble rank, for until the seventeenth century they were not formally restricted to peers and garter knights but examples of usage by lesser knights and gentlemen were still rare.

Later in his talk, our guest discussed some statistics about peers’ supporters. Among seventy-four distinct achievements found by the middle of Charles I’s reign, he found that twenty-four used identical pairs and fifty used non-identical, making one hundred and twenty-four distinct supporters in total. Different peers used the same supporter only if they were agnates of the same lineage or co-heirs of a split peerage. He also identified four fundamental types of supporter: Human, wholly natural beast (eighteen species), semi-natural beast (three species) and imaginary beast or monster (thirteen species). He saw that human supporters were much less popular among English peers of the time than among their Scottish and continental contemporaries.

At the end of the lecture there was time for questions. I asked if he knew anything about the emergence of supporters in corporate heraldry (as opposed to the personal heraldry he had so far covered). He said that corporations began to acquire supporters at a relatively early stage, including all of the greater livery companies of the City of London.

It is often the case that the discussion after the lecture is as blog-worthy as the event proper. On this occasion most of the conversation – punctuated with some very long silences – was between Darrel Kennedy and Sean in New Zealand, the latter showing off his newborn son Arthur. This was the first time I had known anyone bring a baby to a Zoom conference. He joked about being able to blazon infants’ clothes – Argent semé of Blue Whales Proper.

Charles Veale asked if a grant had yet been made to Mary Simon, the new Governor-General. Kennedy said that nothing was yet known but “it’s coming eventually”. I asked about the process behind the heraldic badge granted some months ago to Canada’s Supreme Court. Kennedy said it had started some years ago under Claire Bodreau. He said there seemed to be a fad for every court to have its own arms. I relayed the story of our own Supreme Court’s logo, whose launch in 2009 had met with some public dismay.

Sean then wondered aloud how the supporters of post-1958 life peers differed from those of the pre-modern hereditaries. I recounted my anecdotal experience of nearly-1000 Wikimedia heraldic illustrations that the proportion of peers seeking arms at all is much lower now. I also noted that from about 1800 onwards human supporters appeared more frequently – and are a pain to illustrate. I speculated that life peers might be more disposed to them as non-hereditary supporters could afford to be more personalised. He asked if, in the age of identity politics, human supporters could prove inordinately troublesome. I concurred that there were various heraldic elements – such as Saracen heads, savages and cartoonish African garments – that could be liable to spark outrage among certain circles, and that undoing the damage would be very difficult as coats of arms are not supposed to be redesigned in the manner of corporate logos. Sean recalled speaking to a herald about the design of the old coat of arms of Toronto. There were some First Nations individuals who even volunteered to model for the drawing of the supporters, but wanted to be depicted in Armani suits with mobile phones. I brought up the precedent from the Victorian era that inclusion of modern technology in heraldic achievements tends not to date well. There seemed to be a consensus among the group that one was better off sticking to abstract animal figures. 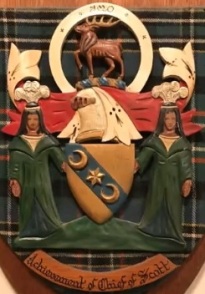 Moira Scott then asked if any remaining participants could identify the supporters on her clan chief’s arms, but we were none-the-wiser and could make no more profound an observation than that the dark brown women were probably not from Scotland. She noted the resemblance of the feathers to those of the Prince of Wales and wondered if she could incorporate something similar into her own arms without incurring his wrath.

After 01:50 the conversation had reached the point where we were talking about our domestic pets and Arthur’s “deposit”, and it became clear that the session needed to adjourn.

As a coda, I will return to the Sudrian realm. We are not far from the official US debut of All Engines Go and already some Spanish editions have been released. The general reaction from those who have seen them is that they are nowhere near as bad as implied by the trailers and leaked test footage, but still fall short of being good as art in their own right or a worthy successor to the franchise’s legacy.

In aid of that latter goal, I looked for armorial opportunities. Already I have invented arms for the Thin Clergyman himself and illustrated those of the Norrambys, but institutional heraldry has not been covered before. Its People, History and Railways gives two examples of heraldry: The badge of the Sodor regiment is actually blazoned Sable two gloves Argent saltirewise charged in fess with the Rose of Lancaster Proper. The shield of arms of Suddery – the capital city – is not truly blazoned but described as “St Luoc arrayed as a bishop standing in a coracle and holding his crozier” with the motto “Luoc Sodoris Lux”,  St Luoc being a legendary Irish missionary of the fifth century. I have illustrated the regimental badge for Wikipedia but the city arms are impossible without knowing the tinctures, or indeed what Luoc looked like. 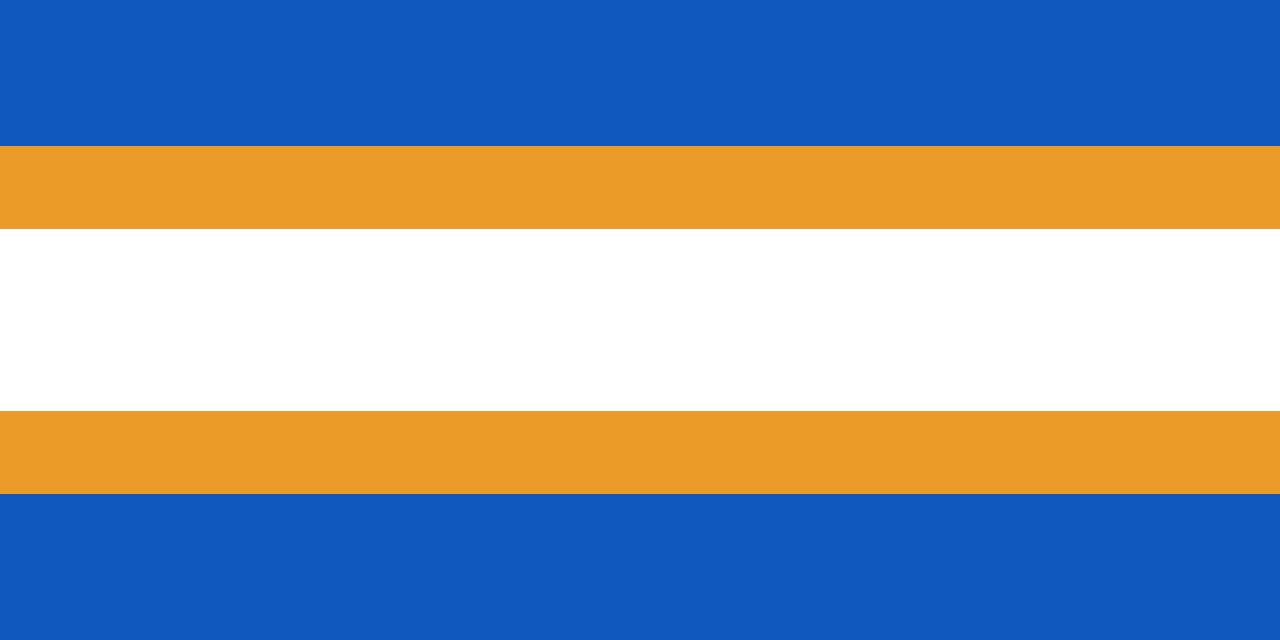 The island as a whole is not said to have any armorial bearings nor a civic flag. The latter was invented by the television series, roughly blazonable as Azure a fess Argent fimbriated Or, though it could equally be Tenné.

Some months ago I discovered a weekly podcast entitled The Benji & Nick Show. It mainly reviews old Doctor Who, but also branches out into lots of other old television. The hosts are Nicholas Briggs (voice of the Daleks) and Benji Clifford (of 5WF fame, later sound designer for Big Finish). They speak in a candid but reasoned manner about a wide range of media. Sadly, they announced some weeks ago that their series will come to an end in September.

Still going is The Delta Flyers, which started last spring but which I only discovered a week ago. It is an episode-by-episode commentary on Star Trek: Voyager by two of its principal cast – Robert Duncan McNeil (Lieutenant Tom Paris) and Garrett Wang (Ensign Harry Kim). Their discussions include personal recollections from the time as well as insights from their later careers. There’s even a bit of poetry thrown in. Currently they have just finished the third season, which means with one episode per week they should finish exactly two years from now.

Having already concocted an armorial of Britain’s universities, this year I moved onto the schools. The article at present is at least in a releasable state, although obviously it is not complete, and possibly never can be. There are, of course, far more primary and secondary schools in the United Kingdom than there are places of higher education, and probably a much lower proportion of them have acquired (whether by grant or assumption) armorial bearings. A major difficulty is working out what actually counts as a coat of arms, as many schools have logos designed in the traditional shape of a shield but with contents not blazonable, or not conforming to heraldic rules (e.g. faux quartering, overlapping charges, too much writing).

Geographic representation has also been a problem – I found way more shields for schools in England than in Scotland, Wales and Northern Ireland combined even accounting for population difference, so eventually had to split that country into its own page. 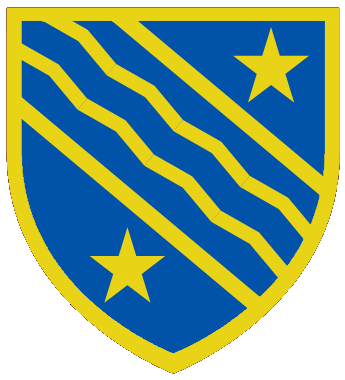 My illustration of the shield of Bangor Grammar School in Northern Ireland was featured on the Heraldry Subreddit. It was reviewed positively, at least compared to the other images in the same post, though it was primarily commenting on the design rather than my graphical skill.