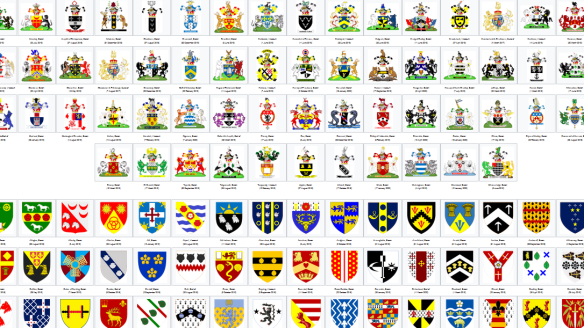 It has been a few years since I started making heraldic illustrations for Wikimedia Commons. My earliest, according to what the file page says, was that of William Pitt the Younger, uploaded on 11th September 2016. By 8th August 2017 I had made twenty-two, and decided it would be useful to collate them on a subpage. I originally formatted them as a fairly simple two-column table showing each image with a short description next to it. New images collected slowly and intermittently for a year after that, but a sudden growth spurt occured in the latter half of August 2018 when more than eighty new files were added following my discovery of Cracroft’s Peerage. As 2019 dawned I had counted two hundred and forty images in total.

Having found copies of Burke’s and Debrett’s in the university library and the internet archive I was able to expand the collection at a steady pace. In the last few months I noticed that the list had grown very long and was difficult to navigate effectively. This week, therefore, I decided to move them into a gallery format, with files sorted by type rather than by date.

It took several hours to move each individual image from the old page to the new and add the appropriate captions. The principal advantage of the new gallery format, at least for me, is that with the images sorted into neat rows instead of one long column it is now easier to count how many there are. The total presently stands at an ominous six hundred and sixty-six, though this does not include two which the community – one for the Baroness Hale of Richmond for which I couldn’t confirm a source, and a speculative placeholder for the Duchess of Sussex which was subsequently jossed.

My armorial collection is still some way off the size of Sodacan’s, of course, but it’s a start. 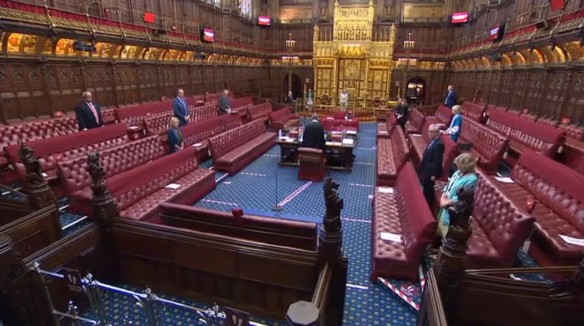 Are we missing something?

After an unusually long recess today was the day that Parliament finally resumed, but everything was far from back to normal.

Social distancing measures require MPs and peers to be spaced 2 metres apart, which significantly diminished the capacity of the main chambers. Plenaries can no longer be physically attended by more than a few dozen members at a time. Every other bench has been ruled out of bounds. In the Lords this is indicated by a red cloth placed over the length, while in the Commons there are slabs of cardboard bordered by hazard tape blocking access. The small white cards on the frames of the green benches, normally used by honourable members to reserve a place in advance, were replaced by either red cards with a no entry sign or green cards with a tick to indicate which spots could or could not be used. The red benches have no corresponding external frames, so instead the tick signs were attached to small pillars propped up behind. Two of the three cross benches had disappeared, as had two of the three seats for the upper house’s clerks, and both chambers had lines of tape on the floor marking standing distances.

Last month, without much fanfare, two new junior ministers were appointed to the government with a promise that they would be made life peers. One was Sir Gerry Grimstone, former chairman of Barclays Bank; the other was Stephen Greenhalgh, former Deputy Mayor of London. Today they finally had their introduction ceremonies, which fell short of what they had probably been led to expect. Black Rod still wore semi-state dress, but Garter did not wear his tabard, nor did the newcomers themselves wear the familiar robe. The supporters – existing members of the house who accompany the new one – were omitted entirely. The reading clerk began with the letters patent already in his hand rather than the inductee delivering it to him, then stepped back to give their lordships space to swear the oath and sign in – though Greenhalgh almost forgot the latter step and had to quickly double back. After bowing to the throne from behind the clerk’s table as usual, the procession exited through the content lobby, with the peer only nodding to the acting speaker on the woolsack instead of shaking hands. One cannot tell from the footage, but it can reasonably be reckoned that friends and family of the new members were not given the usual invitation to watch from the gallery, nor to attend any kind of reception afterwards.

Of course, this is still the early stage of transition. Both houses are moving to conduct much of their business virtually, so shortly it may be the case that the empty benches are filled with monitor screens, or even that the chambers are not used at all.

A consequence of the COVID-19 lockdown is that the great majority of schools, colleges and universities have closed as far as physical premises are concerned. This has naturally forced a major surge in online learning as institutions scramble to keep their curricula going on a remote basis.

Heraldry has doubtfully ever been considered a core subject, and indeed neither the College of Arms nor the Lyon Court are considered essential businesses. Both have closed their offices to the public. The latter has attempted to compensate, and perhaps keep children busy, by releasing a rudimentary online course in Scottish heraldry.

The content is rather basic and most hobbyists will not learn anything new from it, but it is pleasing to see that an effort has been made. As I and others have noted, the proliferation of knowledge in this subject online has been rather slow and haphazard, relying mainly on a small smattering of hobbyists who use whatever reference materials they can obtain – typically those which are out of copyright and thus septuagenarian or older. The present circumstances may finally see some progress on this front, though of course it is still much too early to tell.